WADA List of Prohibited Substances and Methods comes into force

The World Anti-Doping Agency (WADA) 2019 List of Prohibited Substances and Methods published in October came into force on January 1, 2019. Whether you’re an athlete, coach, physio or doctor, it’s vital you are aware of the changes, so you don’t get caught out and end up with a ban from sport.

The full List can be quite dry to read unless you’re into chemistry, but it contains vital information you need to know when training, competing or working with athletes. Fortunately, there are no major changes for 2019, however several of the changes relate to supplements or ingredients commonly found in them. 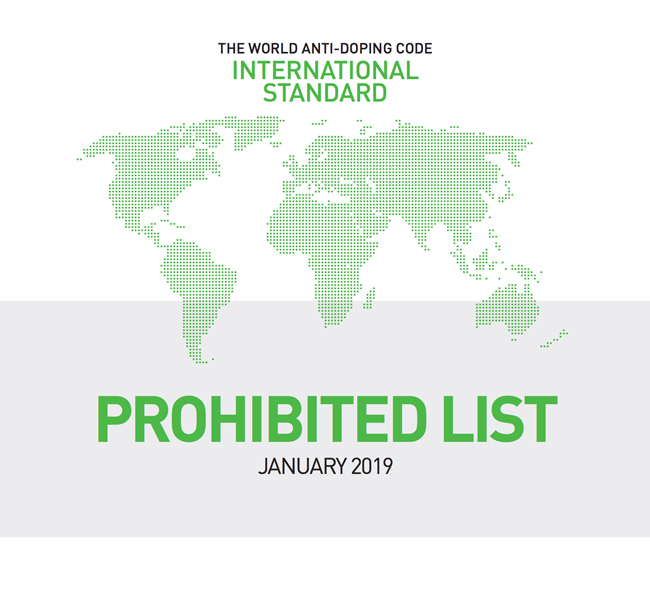 In the UK the UK Anti-Doping (UKAD) agency advises athletes to take a food-first approach to nutrition where possible, as no guarantees can ever be made that a supplement is free from banned substances. UKAD has outlined the key things you need to know about the 2019 WADA Prohibited List:

The following names for substances which were already on the Prohibited List (in brackets below) have been added, so please check ingredients carefully as these may crop up.

More examples of prohibited substances have also been added.

The title of section 4.4 has changed from “Agents modifying myostatin function(s) including, but not limited, to: myostatin inhibitors” to “Agents preventing Activin receptor IIB activation”.

The following examples of prohibited substances have been added to reflect the ways in which the Activin receptor can be affected:

‘Gene Doping’ has been changed to ‘Gene and Cell Doping’.

The definition of gene doping has changed to include the term ‘post-transcriptional’ to clearly define the processes that can be modified by gene editing.

Stem cells are not prohibited for treating injuries if their use restores normal function of the affected area, rather than enhancing function.

Cyclists: Be aware of tramadol

While WADA has elected to keep tramadol on the Monitoring List, rather than move it to the Prohibited List, the International Cycling Union (UCI) has announced plans to start testing athletes for tramadol from January. We are awaiting further information from UCI on this, but current reports indicate cyclists will have a finger pinprick before a race, which detects the presence, or not, of tramadol and its level of concentration. This could lead to cyclists being banned from starting a race if they have used tramadol, primarily due to health concerns. We will update you when we know more.

If you’re in any doubt about any medications or their ingredients, you can check them on the Global DRO website. Supplements can be checked on the Informed Sport website, but please be aware this only minimises the risk, no guarantee can be given that any particular supplement is free from prohibited substances.

Athletes who have a legitimate medical reason for using a prohibited substance or method which is on the List, can apply for a Therapeutic Use Exemption (TUE).

A summary of the major modifications and explanatory notes can be viewed here.