Skip to content
What value do we place on being a rowing champion?

What value do we place on being a rowing champion?

A championship is defined by dictionary.com as “a series of competitions or contests to determine a champion”. In the UK we have annual rowing competitions run by the governing body to crown champions at junior, seniors & masters levels. British Rowing announced this week that the Senior Championships were being moved to 15-16 June provoking widespread criticism from a membership short on patience with their governing body.

In recent years being crowned a British champion in rowing has lost much of it’s shine to the athletes who could legitimately be called champions in our sport. Rowing as an athletic endeavour has changed with the focus now on the Olympic cycle, made possible by an abundance (by comparison to other rowing nations) of funding from the Lottery.  This lead to the creation of the High-Performance Clubs, a misnomer really as of the eight HPC’s, only one, Molesey is actually a club anyone can join whereas six are universities where membership is tied to academic performance and one, Leander has limited opportunities for participation.

In reality, the aspirations of rowing champions are driven by the value they ascribe to an event rather than what it says on the medal. For seniors, it is undoubtedly winning Henley Royal Regatta or Henley Women’s Regatta. For those not at Brookes Uni, Edinburgh Uni or Leander it’s more likely to be BUCS regatta. For masters, Henley Masters Regatta is likely to mean more assuming you can get a slot at this hugely over-subscribed and excellent event. 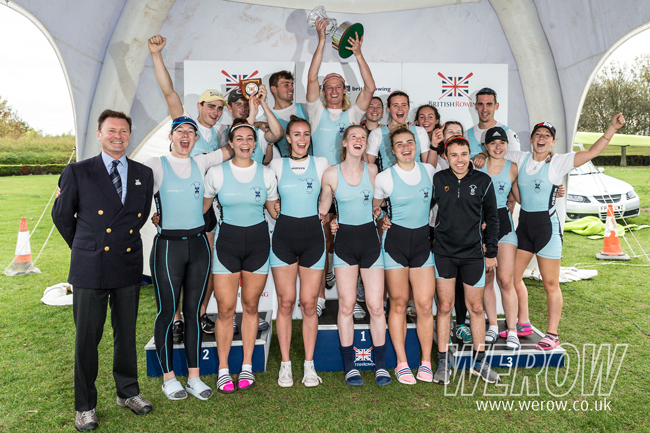 For juniors, this might be winning one of the championship competitions at National Schools (NSR). Ironically the “championship” aspirations of NSR alienated all but the core of the top private rowing schools when the rules were tightened last year. But NSR champions and Henley winners St Paul’s School, the best schoolboy crew for several generations, did not attend the junior championships in 2018. In fact the OJ8+ category attracted just 2 entries.

Of course, the Henley events are side by side races and some might argue that the British Rowing championship events provide much-needed 6 lane racing experience. From what WEROW sees on club Instagram stories many top clubs have regular access to Caversham, Dorney Lake and Nottingham so the pressure for lane experience is no longer there.

After the PRI chaos of 2017/18 British Rowing seems to have taken another step into the mire of discontent. The organisation is seen by its members to be principally concerned with the Olympic cycle and is perceived to have turned it’s back on the ordinary member not at an HPC, university or school club. If that were not the case if members were supportive, happy and engaged, then why would British Rowing be carrying a £400,000 funding shortfall (as reported in the March 2018 accounts) and relying on a hugely strained group of amazingly tolerant volunteers to be running events?

Chairman of British Rowing, Mark Davies says on his blog (markxdavies.com – website down at the time of publishing) and in his tweets that he wants members to be proud of the organisation he leads. But he needs to know that is not within our control. The monopoly he leads, British Rowing, has to do something to make us proud. In the meantime, the members, the markets, will ascribe value where they feel their endeavours are most richly and meaningfully recognised.