The Tokyo Metropolitan Government (TMG) this week confirmed that the construction of the Sea Forest Waterway, venue of the rowing and canoeing events, is currently on schedule. The TMG confirmation came during a tour of the four venues located in the Tokyo Bay Area put on for the press on Tuesday. The four venues comprise the Forest Waterway (rowing & canoeing), the Olympic Aquatics Centre (swimming & diving), Ariake Arena (volleyball & basketball) and the Canoe Slalom Course.

The Sea Forest Waterway in Koto Ward was cleared for construction in November 2016 after Tokyo Governor, Yuriko Koike decided to abandon a proposal to relocate the events to Miyagi Prefecture. However, the land dispute between Ota and Koto still rumbles on after Ota rejected arbitration by the TMG and took the case to court. 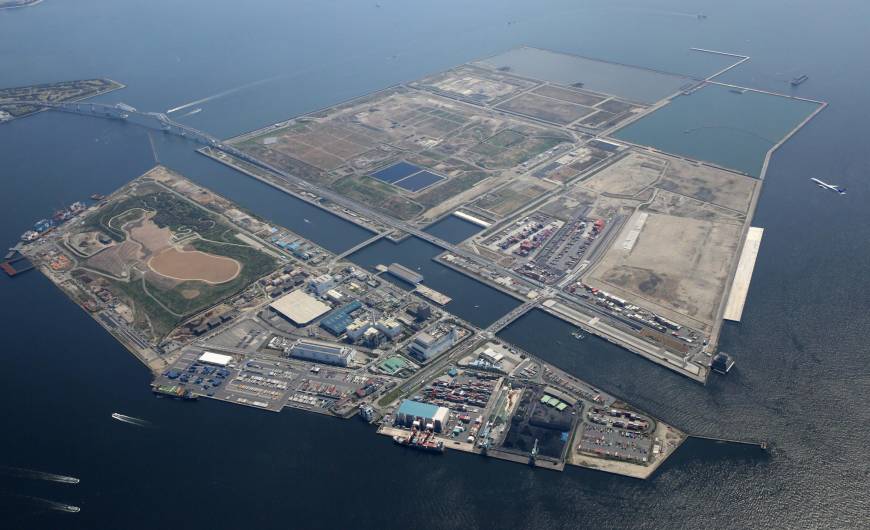 Ota and Koto wards both claim full ownership of this artificial 500-hectare island built with landfill in Tokyo Bay. © KYODO

Both wards claim full ownership of the 500-hectare artificial island, which was built along the city’s waterfront with landfill composed of waste and garbage. Koto Ward argues that residents have long accepted waste and garbage from around the capital since the landfill project began in 1973. Ota Ward says that its seaweed growers were engaged in laver culture there before the work started.

During the tour on Tuesday TMG officials confirmed that the 2,000-meter-long Sea Forest Waterway was 20% complete and scheduled to be ready by March 2019. The venue will have a seating capacity of approximately 24,000, which will be reduced to 2,000 after the 2020 games.

Around 200 construction workers are currently at work on the site, which includes the construction of a dam to keep water levels on the course constant during the competition. A TMG official told the Japan Times, “My understanding is that races will be held in the mornings and afternoons, so we need to be able to maintain the water levels, we need to limit the effect of the tides.”