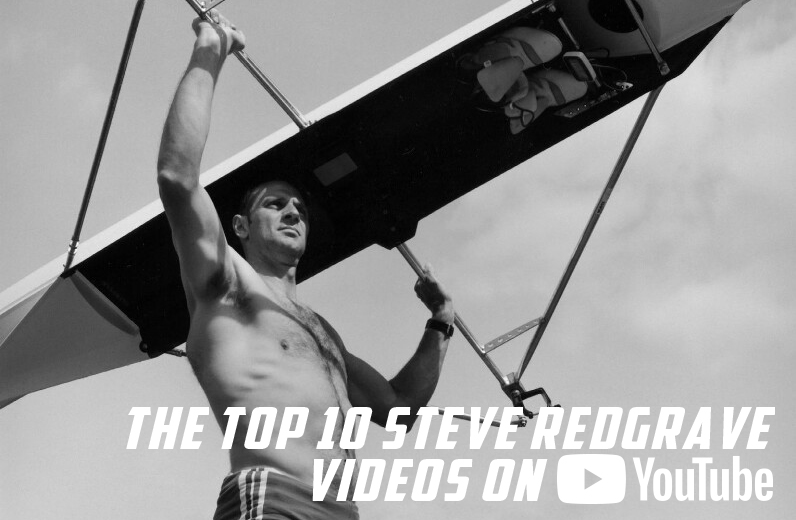 It’s been a while since Sir Steve Redgrave hung up his unisuit and donned his plus fours. The last time we saw Redgrave in action was at the head of the Charles in the British Invasion eight of 2014 which included former fours partners, Sir Matthew Pinsent and Martin Cross.  We thought we would have a look around YouTube and see what video nuggets we could find about Sir Steve Redgrave. We compiled the WEROW top ten picks covering early sculling, golf promos, career highlights and dodgy promos. In no particular order…

Steve Redgrave in a single and being interviewed on ITV at the National Championships in Nottingham in 1985 aged 23 and already an Olympic Champion.

Steve Redgrave and Helen Glover: “Do you bring your dad to all your races?”

Steve Redgrave and Helen Glover have an outing at Dorney Lake with Jack Whitehall for Samsung.

Steve Redgrave does a promo for Juice Doctor

According to Beauty and the Dirt blog in 2010 “Olympic gold medallist Sir Steve Redgrave (founder member of Juice Doctor) has decided to help us stay hydrated by becoming the spokesperson for the new Juice Doctor isotonic drinks. These drinks are designed to help the body retain essential fluids once absorbed and…..boring! Basically, they taste great, contain only 20 calories per 100ml and have not a single artificial colouring, flavour, preservative, salt or sweetener in sight so you can drink as many of them as you like.” Except you can’t as they are sadly no longer available.

Steve Redgrave on This is Your Life

Steve Redgrave has his hour on This is Your life together with wife Ann Redgrave, the hugely popular current GB Chief Medical Officer. Redgrave is joined by Mike Spracklen at  14:50, Martin Cross & Richard Budgett at 15:56 and cox, Pat Sweeney at 21:14.

Winning the first Olympic gold in 1984 at Los Angeles

The Los Angeles 1984 Olympic Games were Steve Redgrave’s debut at the Olympics aged 22. He rowed stroke in the M4+ with Martin Cross, Andy Holmes, Richard Budgett with cox Adrian Ellison. Andy Holmes would later be Redgrave’s partner at Seoul 1988, in the Coxed and Coxless Pairs. Holmes tragically died in 2010 aged 51 from weile’s disease.

Steve Redgrave sculling at Marlow in 1986.

Steve Redgrave admits he has an electric golf cart

If you insist on spoiling a good walk by playing golf then there comes a time, even for an ageing super-Olympian, when you have to get some motorised wheels for your clubs. Drop in at 0:30 for Sir Steve’s new ride in action.

Steve Redgrave wins a 5th consecutive gold medal in Sydney Olympics in 2000 beating Italy by 0.38sec in a super-close and exciting race between Australia, Italy, Slovenia and Great Britain. Redgrave rowed in the two seat with Matthew Pinsent, Tim Foster and James Cracknell.

Comedian Lee Hurst and former England cricketer David Gower are blindfolded and asked to guess the identity of two mystery sports celebrities on the BBC sports quiz, They Think It’s All Over. Steve Redgrave and Matthew Pinsent show off their Olympic Medals in their unisuits.

Steve Redgrave arrives at Leander Club with a crew made up of young rowers from Henley Rowing Club, Upper Thames and Leander together with police chief inspector, Andy Milner in the four seat with a spare torch. The Henley Standard did a one-year-on follow-up here which found that most of the crew had stopped rowing after this event.

Always an air of tension between these two – who can forget Redgrave’s disapproval as John Inverdale broke protocol by pulling Mahe Drysdale in for a quick un-scripted interview at the Rio Olympics. Drysdale had just beaten Croatian sculler, Damir Martin and was on his way to his first interview with New Zealand TV.

Redgrave later walked off set after Inverdale referred to him as a silent James Bond villain after some 007-themed footage. “Well, Oddjob alongside me here enjoyed seeing that . . . ” Redgrave responded: “We’ll have to call you Jaws because I can never get a word in edgeways”. About 10 minutes later, Redgrave rolled his eyes as Inverdale was talking about women’s rowing before pulling a face at his colleague and walking off.