Skip to content
The importance of women in sports science research

The importance of women in sports science research

Stacy Sims, a former Ironman World Championships competitor, is a senior research fellow at the University of Waikato in New Zealand and has been telling US website, Outside how the lack of female-specific sports research is holding female athletes back. There is a growing realisation that male and female athletes are separated by more than just differing sexual organs.

Sims experience of injury and training issues as a top-level triathlete has spurred her to become one of the leading voices pushing for greater consideration of sex and gender in sports science. She co-founded Osmo, a hydration company that formulates products customized for men and women. In 2016, she published Roar, a training and nutrition guide aimed at women.

“I didn’t think I would be sitting here in 2018 still talking about how we need to have this conversation,” Sims says. “Women are not little men. When you look specifically at our physiology and genetic profile, and when you adjust our training and nutrition to account for those factors, we get better performance outcomes.”

Men have long been overrepresented in medical research for a few reasons. Men were predominantly the ones conducting the research and in the position to make decisions about policy and research design. There’s also the issue of funding. Exercise science is often supported by sports organizations like the NFL and the Union of European Football Associations (UEFA). 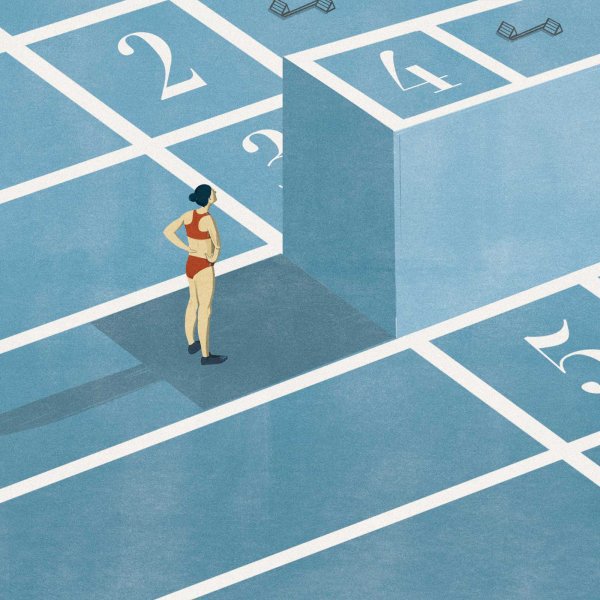 Then there are the logistical and methodological hurdles. It can be more expensive to study female athletes since women exhibit greater physiological variability due to fluctuating hormones. These chemical messengers have wide-reaching effects on temperature regulation, macronutrient metabolism, hydration, and central nervous system fatigue, in addition to the menstrual cycle. Those effects can create noise in the data that’s difficult, time-consuming, and expensive to control for in the research design.

The absence of females is pervasive across all medical research. A review of 1,382 exercise medicine studies published between 2011 and 2013 found that women made up 39 percent of total study participants. A follow-up evaluation found that among 188 studies published in two academic journals in early 2015, women made up 42 percent of study subjects. The discrepancy is particularly pronounced in sports science. Among studies in that field, women accounted for only 3 percent of participants.

As Angela Colantonio, professor and director of the Rehabilitation Sciences Institute at the University of Toronto, put it, “If your science isn’t generalizable to half of the population, how good is your data?” Despite this imbalance, there’s a growing recognition that women experience training, injury, and recovery differently than men and would benefit from sex-specific research and guidelines.

Stacy Sims sees the lack of data and understanding of female physiology as the missing piece to unlocking higher levels of female performance. She’s one of a handful of scientists studying the role of hormones. When hormones like estrogen and progesterone rise and fall during the month, female body systems fluctuate in a way that a man’s body doesn’t.

For example, when women start their periods, estrogen and progesterone drop, and they most resemble men hormonally. During this time, women can easily metabolize carbohydrates and experience less fatigue. “You can hit really hard training and get fantastic training adaptation during this time,” Sims says. As hormone levels increase, women generally don’t perform as well. In addition to cramps, GI issues, and bloating, core temperature rises and plasma levels drop, making it harder to stay cool. It’s also more difficult to metabolize stored carbohydrates and repair muscle during this high-hormone phase.

“Our menstrual cycle shouldn’t be a detriment,” Sims says, but women need information about how it affects their bodies so they can make adjustments to account for those changes.”

In the past exercise research, usually conducted by males, has been conducted without explicit reference to the sex of the subject, usually male. However many countries are now waking up to the fact that men and women differ in more than just their sexual organs. In the US authorities are requiring scientists to include sex as a biological variable (just like age or weight) in the design, recruitment, analysis, and reporting of preclinical cell and animal research, in addition to human studies. If not, scientists must justify why it’s not included.

Some researchers are putting their latest gender-specific findings into the hands of female athletes so they can proactively use the information in their training. Last year, Orreco, a tech company that uses biomarkers and sports data to improve performance, launched FitrWoman, an app that helps women track their period and tailor their training and nutrition based on hormonal fluctuations.

“People want to know why they feel the way they do and what they can do about it,” says Georgie Bruinvels, a research associate at St. Mary’s University in London and lead scientist for FitrWoman. In July, FitrWoman announced a partnership with USA Swimming to provide educational workshops for coaches and athletes and to conduct research. Sims’ book Roar is a manual to help female athletes understand the inner workings of their body and home in on the best nutritional and training strategy to perform well.

You can read the full article on Outside.