Shane O’Driscoll and Mark O’Donovan nailed their colours to the mast yesterday confirming that they intend to move from the non-Olympic lightweight pair to the Olympic class heavyweight pair. Ireland was represented by Fionnan McQuillan-Tolan & Patrick Boomer in this boat class at the World Rowing Championships in Sarasota, finishing fourth in the C Final.

O’Driscoll and O’Donovan have dominated the LM2- in 2017 winning the World Championships, European Championships and all three World Cup events. However, in order to stand a chance of making the Tokyo Olympics in 2020, the pair feel they have to make the step up in weight class now. They will be stepping into a talent pool that includes the established pairings of Sinkovic/Sinkovic, Onfroy/Onfroy and Hunter/Murray.

The pair will need to take some steps back before they can move forward and that may mean a lean 2018 as they bulk up. Shane O’Driscoll told The Southern Star newspaper yesterday, “It’s important that we get our heads around that from the start. Realistically, next year we won’t be winning a heavyweight event, judging on our times from last year and how much we can achieve in a few months. We are going to take a step back before we can go forward”. 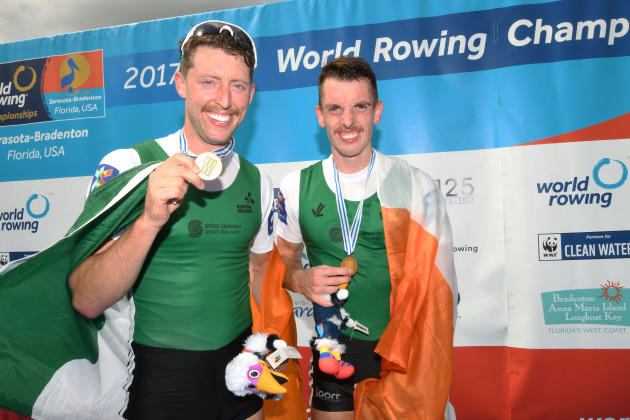 O’Donovan and O’Driscoll at the Rowing World Championships

O’Driscoll  accepts that the pair will lose their winning streak but says they will be setting realistic goals for 2018. “We have to accept that it’s going to be a big challenge. Putting on the muscle, it’s more kilos so we will weigh more, we will carry more weight, it will take time in the gym and we need to get the bal­ance right between that and the water. It will take time”.

In his interview, O’Driscoll says that the pair is “rowed by oarsmen with long arms and legs at around 90kgs and that he is currently 74kg and O’Donovan 75kg. “We’re caught for height too, especially me. I’m not a tall guy”. However, the current World Champions, Italians Giuseppe Vicino and Lodo Matteo were 85kg and 82kg so well within reach of the Irish pretenders. Next weekend, 16/17 December, Irish Rowing are holding their December Training Camp and the pair are still listed as Lightweights.

The pair are used to making changes. In 2014 they were rowing in a four which was not a success so they switched to the pair, a class they have since dominated. O’Driscoll  told The Southern Star ‘Now it’s a new chapter, similar to when we started out in the lightweight pair and every year we are going to build on it, up until Tokyo. This is a bigger challenge than winning the lightweight world but we’re ready for it. Qualifying for the Olympics is our goal.”