The Department of Health recommends we exercise for half an hour a day (in intervals of at least 10 minutes), 5 days a week. Brisk walking even counts and It’s been shown that 150 minutes a week are of benefit to your health. Many people don’t manage those 150 minutes but I am sure you have heard it all before. 150 minutes really is not much but then I love sport and I do a lot more than that, not even including my (often brisk) walking.

I am also what’s called a junior doctor. Not that junior, really as I’ve been at it for a while but if my patient asks me something and I don’t know, the junior comes in handy! (even though I left medical school 7 years ago most of us are still ‘junior’ even at 10 years more). This article contains my thoughts and meanderings on exercise and is not meant as a medical textbook or a prescription. However I am writing it because I think it is interesting, important, and something your GP probably won’t explain to you.

So why 150 minutes? It’s about risks and benefits – and there are a lot of both for various body parts and systems. Including bones. Today is about bones.

About the author: Dr Mathilde Pauls

Dr Mathilde Pauls is a Berlin-born anglophile who has always been active in sport. She played handball at county-level as a child in Germany. Mathilde subsequently took up rowing and represented Germany at the U23 World Championships in 2005 (winning the LW2x)  and as a senior in 2006. 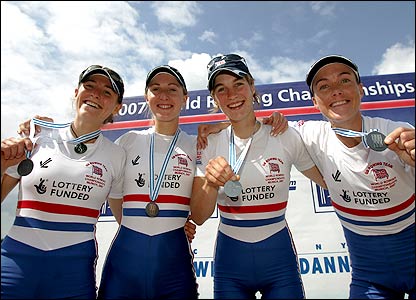 In 2007 she represented Great Britain in the LW4x, winning gold at World Cup 3 in Lucerne and silver at the World Championships in 2007 with Sophie Hosking, Laura Greenhalgh and Jane Hall. In 2008 she competed at Rowing World Cup events and the World Rowing Championships in the LW1x. The same year she made the final of the inaugural Princess Royal Challenge Cup at Henley Royal Regatta. Mathilde has also competed at a high level in duathlon/triathlon and is currently part of the Sigma Sport Women’s Cycling Team.

After studying medicine at Cambridge and Imperial College, Mathilde is now a trainee neurology doctor. She is a qualified doctor and has an MSc in Sports and Exercise Medicine and a BA in Zoology and Physiology.

In November, I took part in a study that was looking at body composition, measured using a DEXA scan, in the top level of amateur cyclists. I’ve done a study like this before when I used to row, looking at lightweight rowing and bone density and body fat but I’ll concentrate on the athlete’s bones here. 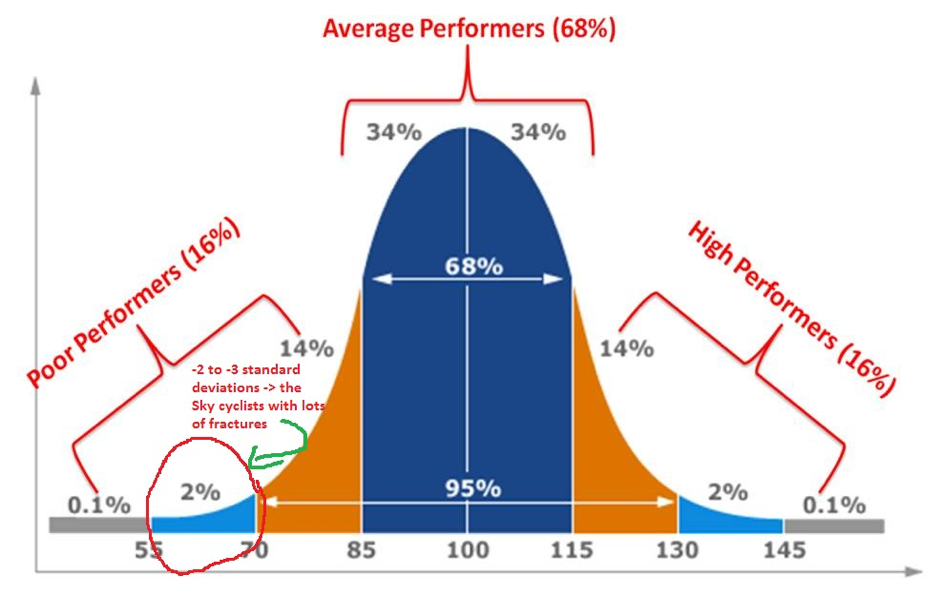 There are 3 main issues with bones and sports and bone maintenance in general:-

1 ‘Lack of demand’ and Osteoblasts (and Osteoclasts)

Sports like cycling and rowing are non-weight-bearing which is not ideal for your bones. Bones are not static, they get remodelled all the time, depending on use and need (like skeletal muscles, the heart, the brain). There are osteoblasts (bone building cells) and osteoclasts (bone breakdown cells). To spur the osteoblasts into action, you need to ‘load’ your bones. So when you bounce up and down lots, the bits of your skeleton that are needed for bouncing (probably most of it), will send off messages to your system saying “bounce bones needed. Let’s reinforce”. And boom, in simplistic terms your body will get on with making those bones a bit more sturdy. Rowing and cycling, swimming or being an astronaut (particularly bad) do not really do that.  So to strengthen your bones do some plyometrics or simply hop up and down – it’s pretty time efficient too.

The cells also need raw materials and the key one that quite often seems to be missing a is calcium. Something like 99% of your body’s calcium is in bone and teeth and only 1% is in the blood. The calcium floating around is also needed for other things like hair and nails and we lose some in sweat, pee and poo. So if it’s not coming in at the top, bones are an excellent reservoir to dig into. There’s so much calcium in the bones, and this system works so well that until there is quite a lot missing, you’ll have no idea it’s happening.

There is a lot of calcium in dairy but milk isn’t everyone’s cup of tea. Also, milk is not so cool in some circles either. Not that I am turning into a grumpy old cynic but Google tells me that there are plenty of other calcium-rich foods:-

My rowing team-mates did not like the idea of combining them in a smoothie mind – funny that! Another thing to remember about calcium is that your body absorbs it better together with Vitamin D so supplements like Calcichew have both. But whether you ar an omnivore, vegetarian or vegan there are many calcium-rich options.

I think this is the crunch point for young, active people that do by and large eat pretty well. For some time, there has been research into something called the female athlete triad. It’s a syndrome that actually quite commonly occurs in physically active girls and women. In simple terms the female athlete triad was originally described as consisting disordered eating, amenorrhoea (absence of a menstrual period) and osteoporosis.

It turns out this is a problem for men too, just they don’t have menstrual periods and sperm production is a bit more fail safe, so men might not notice this until much later. But as I mentioned above, male professional cyclists (and jockeys) have been found to have osteopenia, and sometimes even osteoporosis (3).

And the concept at the centre of this, the bit that seems to be causing the problems, is the of lack of freely available energy, or one might say a relative energy deficiency. Everything your body does requires energy; every process that occurs in your body ends on a process involving a molecule called adenosine triphosphate (ATP), which when it turned into adenosine diphosphate (ADP) releases a little bit of energy. There are no exceptions.

Freely available energy, then, is what your body does not require for exercise.

Here’s the formula for the freely available energy:

It’s used for things like your heart and nervous system for example and also for general body maintenance like your immune system, tissue repair, bone maintenance, and processes like your reproductive system (or in children also growth and development). However, some processes your body can down-regulate a bit in times of need and some cannot be turned off.

Essential processes would include general brain functions or your heart pumping that are needed to preserve life. But your immune system, tissue repair, reproductive health, bone health etc. are not essential and so the body can save on those if required.

We are meant to have 45kcal/kg of freely available energy per kg of fat-free mass per day. That is about 380 kcal for just the muscles for each of my legs according to my DEXA  scan. If you are 70kg and 30% fat (that’s a healthy figure for a woman), that’s 2,205 kcal per day.

I think you’ll agree that this figure is quite high, and certainly much higher than your basal metabolic rate would require. This figure is also high if you’re training lots and trying to drop weight as say, a lightweight rower. I wish I could have eaten that amount in my lightweight days! The Team Sky riders often consume <10kcal/kg to get them skinnier.

I don’t know how good the evidence for this exact figure is as I have not reviewed the literature, but it is the figure that is consistently quoted in papers on the topic. I guess if you were just pootling around all day and not exercising per se, that’s a reasonable amount to eat. Regardless of whether it’s 43.27kcal/kg, or 46.3kcal/kg or whatever, it does appear we need a good bit of this freely available energy.  If we don’t have it, the body will save on the non-essential stuff like bone maintenance and therefore bone density. A bit like high blood pressure, you won’t notice a decrease in bone density until it causes a problem or you have it checked.

(Small digression regarding the blood pressure: Please go see your GPs, have it checked, and take the tablets they give you. If your ankles swell on Amlodipine or if you cough on Ramipril just ask for another one. I won’t list all the problems people encounter but be aware there are options, and long-term high blood pressure is not good for your heart, brain, or blood vessels anyway.)

The problem with exercise as a high-level competitive amateur sports person is that at a competitive level, it pays to be skinny/light. Weight is not helpful for running fast, or cycling uphill or as a lightweight rower. And if the FAE formula is right, then open weight rowers regularly won’t hit that number either.

Not being toned doesn’t look cool either – looks are important in the age of social media and looking like a pro is part of the game, no? Time to lose some weight for next season then, and of course, train some more – shame about the freely available energy and it impacts on your bones etc. But maybe you’ll get away with it, and then if you ride for Team Sky they might give you some parathyroid hormones injections to help (5).

They’ll also measure your haemoglobin and testosterone, which will probably be low as testosterone falls if you exercise lots and don’t eat much. But they wouldn’t replace that because it would be cheating. But testosterone levels vary naturally, and it’d be awfully handy for sports performance to be near the high end of normal all the time.  We measure things in medicine to watch for the abnormalities, you see, but maybe I am too cynical. And whilst we are on the topic: where do you draw the line? If they are considering giving a bit of parathyroid hormone, why isn’t that cheating?

There isn’t an osteoporosis or osteopenia gene as far as I am aware but looking at families, or individuals, we aren’t equal. Some of us just seem to have heavier bones than others and this seems to be true for the majority of illnesses really. I haven’t reviewed the literature, but I have seen a fair number of patients with a fair number of problems and feel there must be natural predispositions for a lot of things, based on what I see day to day.

And from talks on various topics I have been to, and what I have read about them, the more genetic research that is done, the more we identify genes increasing and decreasing the risk for a wide variety of health outcomes. Genes are not very helpful most of the time as there are so many different influencing genes.

So my opinion is that there is a genetic risk – probably due to a combination of lots and lots of genes, so if all four of your grandparents have broken their hips, you are probably at risk for losing bone density.

So what to do? Make a better-informed choice for yourself! Whether it’s some plyometrics, eating more calcium or stealing your grannie’s Calcichew (no bisphosphonates please, you need both osteoblasts and osteoclasts to work fully) or maintaining a healthy caloric intake.

‘Controlling the controllables’ (or not) is up to you, but I suggest it is a good idea to do so despite the pressures to train hard and look good, because breaking your hip or spine is not nice!