The Rocket Foods New Zealand Rowing Championships are underway on Lake Karapiro, 150 km south of Auckland on the North Island. Held over 5 days, the event started on Tuesday with finals scheduled for this Friday and Saturday, attracting 792 athletes across 69 events.

All eyes have been on the men’s single as the rivalry between Robbie Manson, 28, and Mahe Drysdale, 39 intensifies. Last month Robbie Manson took first position at the Cambridge Town Cup/North Island club championship regatta, with Mahe Drysdale coming in 5th. Both men won their heats on Tuesday afternoon, Manson in 7:16.29 and Drysdale in 7:20.06, and will meet again in the final on Saturday (13:35 local time).

Rowing New Zealand (RNZ) was expected to follow procedure and select one sculler after Saturday. However, the seat is now to be determined over three rounds, with Saturdays’ final being round one. Neither Manson nor Drysdale has elected to contest the seat and both will be allowed to compete internationally. Manson and Drysdale will now compete overseas at World Cup II  (June 21-24, Austria) and World Cup III (July 13-15, Switzerland) and the best performer will get the seat at the World Championships, this year being held in Plovdiv, Bulgaria.

Also racing in the M1x were Skibbereen’s Gary and Paul O’Donovan, who are in New Zealand training, together with club-mates, Shane O’Driscoll and Mark O’Donovan, before heading to Australia. Paul O’Donovan made the M1x A Final but Garry had to settle for the B Final being well off the pace in the repechage. The O’Donovans are also racing in the M2x and made the final on Friday (15:30 local time). They were off the pace in the first round finishing 44 seconds behind winners, Robbie Manson and Chris Harris. Harris won gold at Sarasota for NZL in 2017 with John Storey in the M2x. 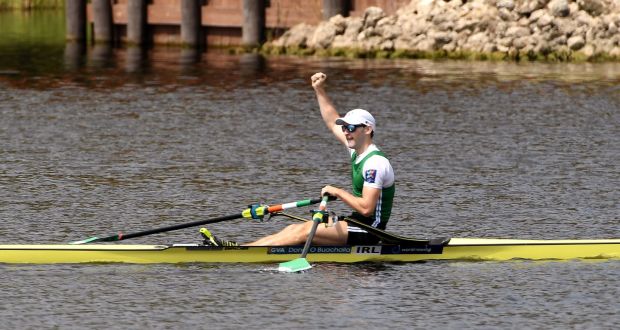 Paul O’Donovan qualifies for the A Final Image: Inpho

The O’Donovans teamed up with Shane O’Driscoll and Mark O’Donovan for the M4-  and after a very slow performance in the first heat on Tuesday, managed to find some speed in the repechage today (Wednesday).  In the final, on Saturday (08:50 local time) they will face stiff opposition from boats comprising members on the 2017 NZL M8+ including the West End Rowing Club crew with Mahe Drysdale in the two seat.

In the women’s events, there have been some interesting pairings within the NZL squad, most of whom were in Europe in 2017 and featured strongly at Henley Royal Regatta (HRR). In the W2x, NZL single sculler Hannah Osborne, beaten by Vicky Thornley in the Princess Royal, teamed up with Brooke Donoghue. Donoghue won the W2x at the World Championships in 2017 with Olivia Loe and the Women’s Double Sculls at HRR. Osborne and O’Donoghue won their heat and will meet Jackie Kiddle and Zoe Mcbride, who won silver in the LW2x at Sarasota, in the final on Friday.

In the women’s singles, Olivia Loe and Brooke Donoghue put in strong performances and will contest the final with Zoe McBride, who won silver in the LW2x at Sarasota, on Saturday (13:50 local time). Hanah Osborne, who represented NZL in the W1x at Sarasota, withdrew after the heat and will not race the final.

Article by Catherine Radvanszky, in-house journalist and photographer at WEROW.