Skip to content
Remembering rowers who died in World War 1

Rowers who competed at Henley Royal Regatta who died in WW1 is the new research project for Mike and Lesley Willoughby who founded Henley’s Lest We Forget project. The project was founded in 2012 to create a lasting memorial to all the Henley soldiers who died in the First World War.

Mike Willoughby told the Henley Herald “After researching for the Battle of the Somme anniversary last year and being invited to go to France and Belgium with Leander Club we realised that there was a much bigger picture.  We made some good contacts with Eton College and Shrewsbury and Radley Schools. The idea for the new project just seemed a natural progression.”

“Henley Races” by Sir Theodore Cooke published in 1919 was the starting point for Mike and Lesley which lists 250 rowers who raced at Henley between 1890 and 1914. Mike said, “This book though wasn’t complete as we have found that many other rowers who weren’t listed.” 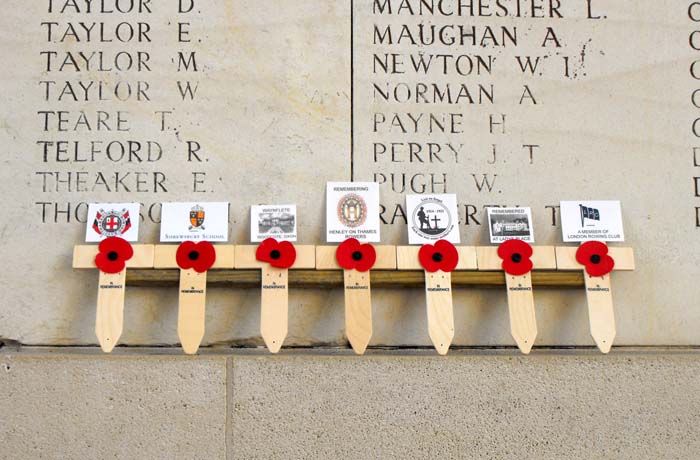 Many rowing clubs have helped with the research, Mike said, “London Rowing Club was a great example.  They were really welcoming, enthusiastic and supportive of the project giving us access to their archives and a special memorial book.”

The Willoughby’s recently visited Belgium and France where they went to the graves and memorials of over 200 rowers who competed at Henley and died during WW1.  On each grave, they visited they placed a poppy cross, donated by the Henley branch of the Royal British Legion, with the badge of appropriate college or rowing club.

The Willoughbys are planning two exhibitions in 2018, at Henley Royal Regatta in July and the River & Rowing Museum in November. The exhibitions, entitled “Rowers of Henley Who Died During WW1”,  will feature pictures and stories of over 200 rowers, along with WW1 artefacts. This year, the Lest We Forget exhibition is taking place at Holy Trinity Church in Henley today and will focus on the importance of the local Red Cross hospitals. For more details about the Lest We Forget project visit their website