Skip to content
Remembering Harrods and the Harrodian Boat Club 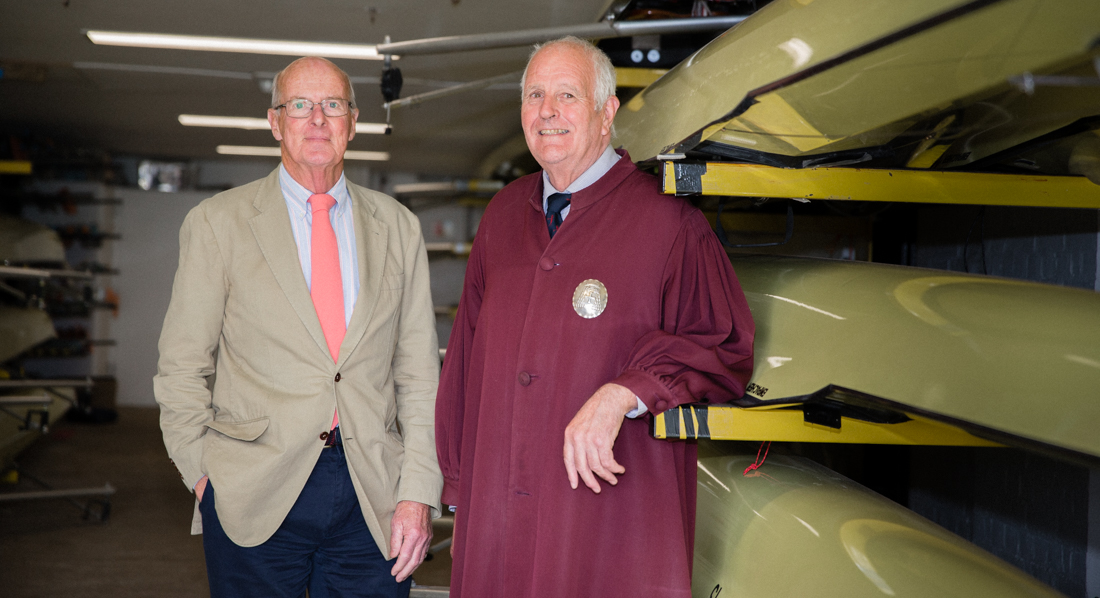 In the late 1950’s David Thomas joined Harrods of Knightsbridge as a graduate trainee.  The eldest of 4 rowing sons from Pangbourne, David learned to row at St Edwards Oxford following which he went to Pittsburgh University before returning home to work at Harrods. It was there that he struck up a friendship with John Leathes, an assistant workroom manager who had formerly rowed for Winchester College and whose father was Harrods’ managing director.

At that that time Harrods had a thriving social club at Barnes which included the Harrodian Rowing Club where the two young men joined forces as double scullers.

The social club was quite a set-up.  Formerly a country house with 14 acres of grounds, the original building was demolished to make way for what was then a state of the art club house with its own theatre and dance hall, billiards and table tennis rooms, 8 hard tennis courts, 4 grass courts, two football pitches, 2 rugby pitches, an outdoor swimming pool and a forty seat restaurant. Harrods staff paid nothing for the use of these facilities.

For their part Thomas and Leathes commenced their sculling campaign by commandeering the Thomas family racing shell. This was no ordinary double having been the boat in which Dickie Burnell & Bert Bushnell had won the 1948 Summer Olympics rowed at Henley. They little appreciated the historic importance of such a boat and its eventual fate was to be left in the University of London boathouse where it still languishes – or not.  Of course, it really should be in the River & Rowing Museum at Henley. 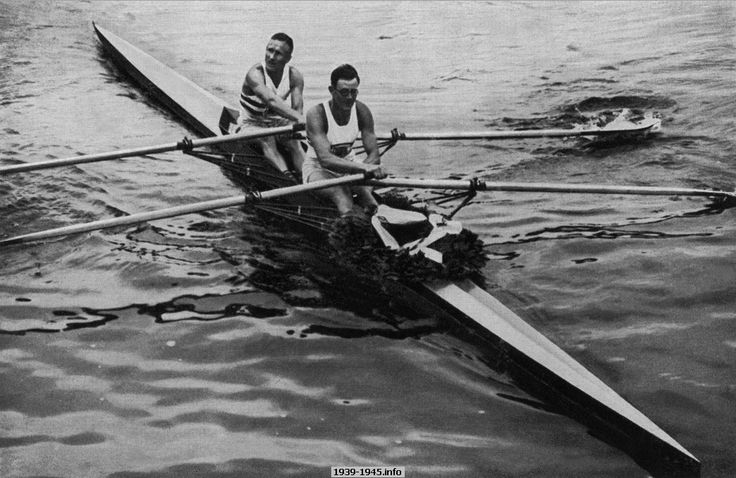 Although the Harrodian R C was affiliated to the ARA (now British Rowing), there was little regular boating activity and it relied on the spontaneous enthusiasm of a few individuals to join in local regattas. Of course rowing practice could only happen in the evening and entering a regatta relied on being able to get the Saturday morning off as Harrods at that time closed at 1.pm.

Surprisingly, in the late 1950s, more ladies rowed for the club than men and, coached by Leathes, they achieved a measure of success. There was only one heavy wooden VIII and so Lord Fraser (then chairman) put up the money for Phelps of Putney to build the Lady Fraser, the first eight designed specifically for ladies. The rowing world had not realized, until the success of the women propelling Lady Fraser that ladies were built differently to men and afterwards there was a rush to build better designed boats. 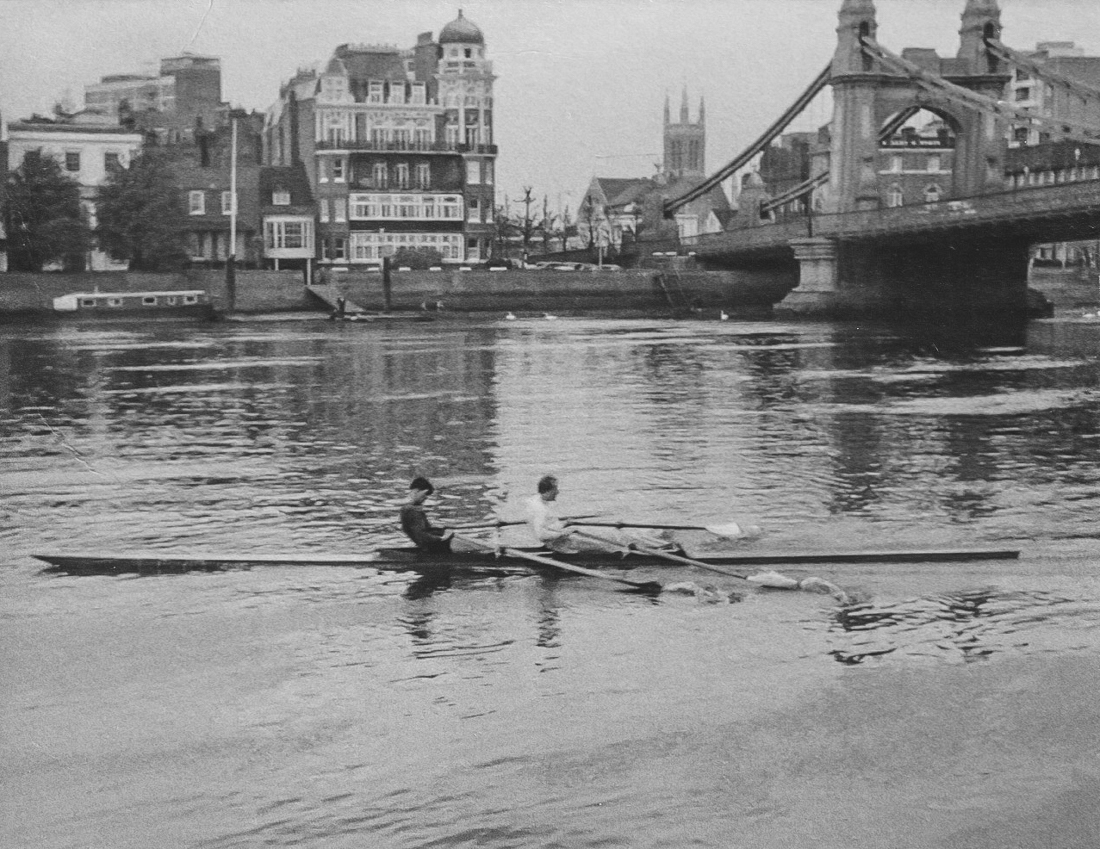 During their competitive careers the boat was mostly transported on Leathes’ Mini Cooper with a specially adapted roof rack. “The overhang front and back was more than the length of the car” says Leathes, “so in towns like Wallingford we had to get out and walk ahead to see what was coming at road junctions!” There were very few regattas with double sculls events but they achieved good results in those they were able to enter and so the question of rowing kit inevitably needed to be addressed.

The iconic green and gold Harrods colours were used to great effect with the blades painted green and the club’s initials applied in gold leaf. The singlets were gold but home tie-dyed cotton white shorts presented something of a problem when the dye ran and looked most odd when they got caught in the rain. The solution came via the Harrods girls school outfitting department who supplied girls schools with wool bloomers for gym wear. Ancaster House at Bexhill had the perfect green tone and the bloomers proved very comfortable for men who rowed.

With Henley Royal Regatta looming, thoughts turned to blazers, so Italian silk was sourced from Harrods fabric department and magnificence was fashioned from gold cloth with green velvet collar and cuffs.  With typical Harrods flourish 3 gold body buttons and 6 on each cuff had the Harrods motto engraved – omnibus, omnia, ubique (anything, anytime, anywhere).  Engraving on the cuff buttons was so small it was hard to read, but of course it was beautifully done because in those days Harrods employed skilled craftsmen who could do anything. 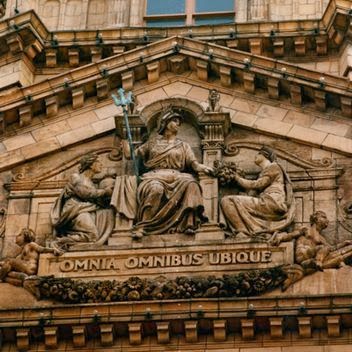 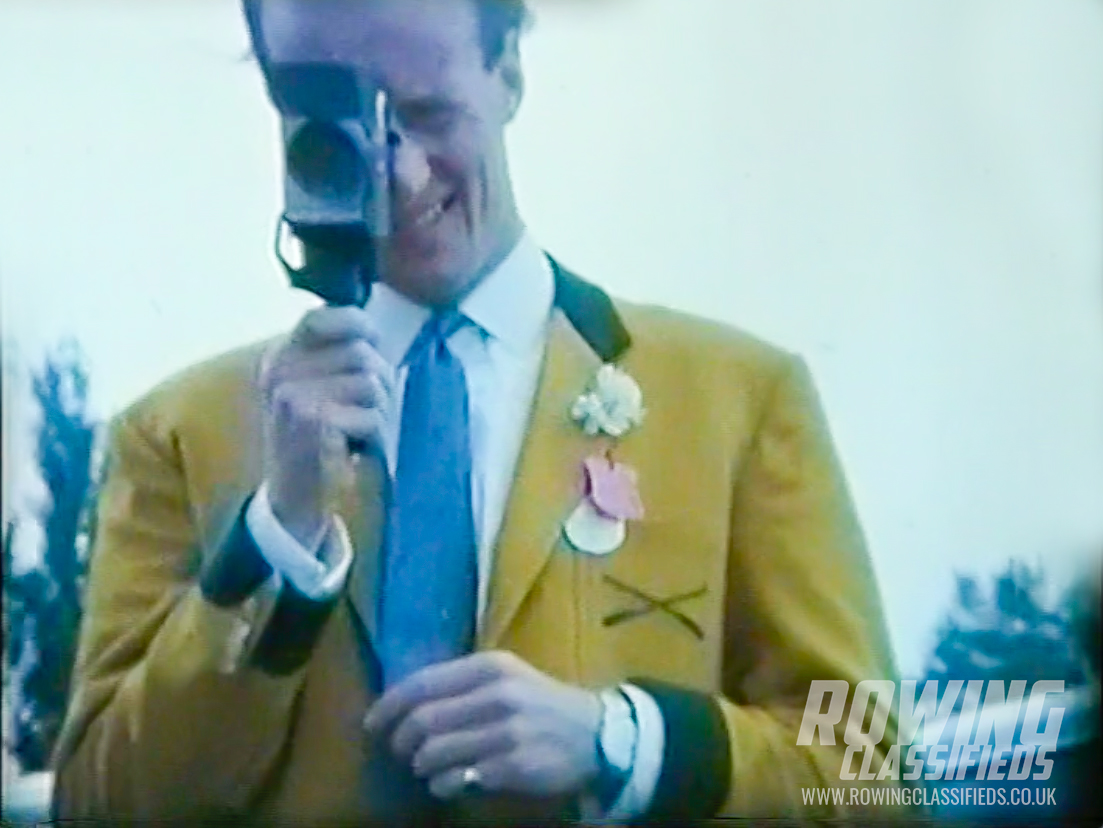 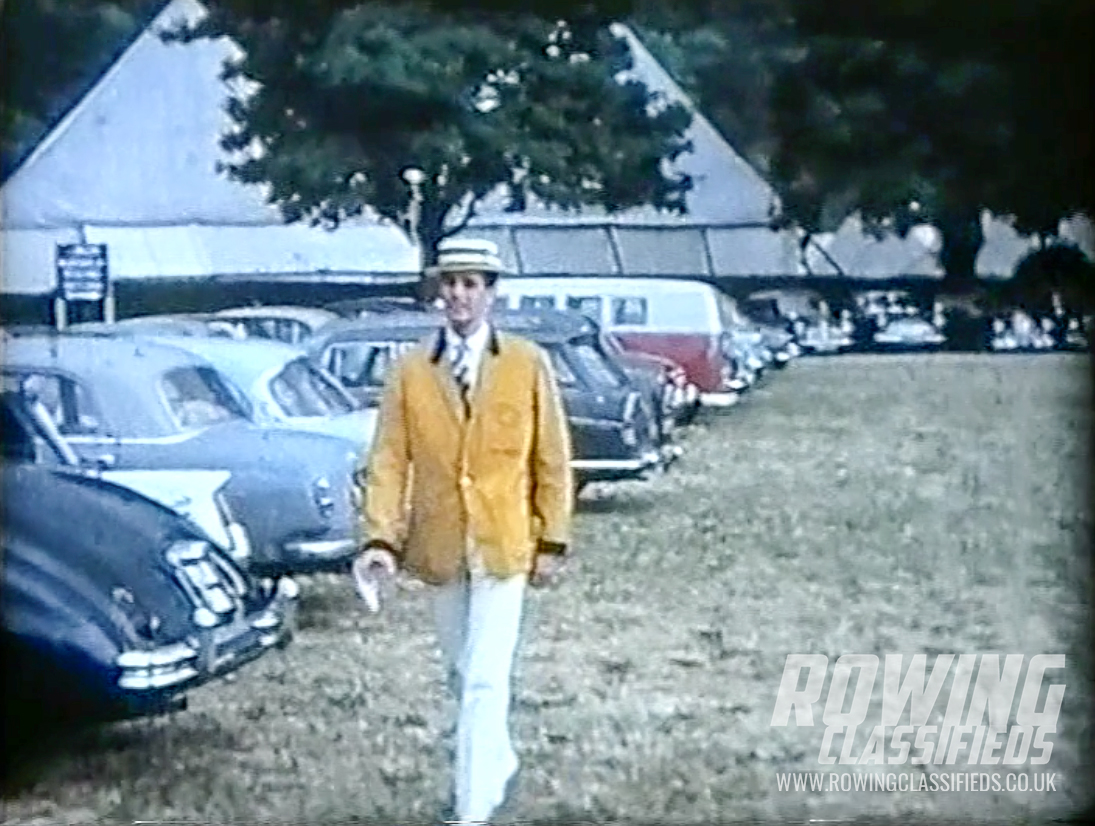 Suitably attired, their careers peaked on August Bank Holiday 1961 at the Henley Town Regatta. In the first round they beat Mike Spracklen & B O Thomas, sculling for Wallingford and subsequently beat Thames Rowing Club in the Final. “As Spracklen was the 1958 Commonwealth Champion” says Thomas,  “we thought we must be on to something, but it wasn’t to be!’”

After further lack of success Thomas and Leathes decided to call it a day as a Double. However, Thomas was keen to continue alone and entered himself for the Diamonds at Henley Royal Regatta in 1962 hoping he would be able to get a day off from work mid-week. “I did eventually manage to achieve that but rather dreaded going back to ask for second day should I progress, but the situation never arose! 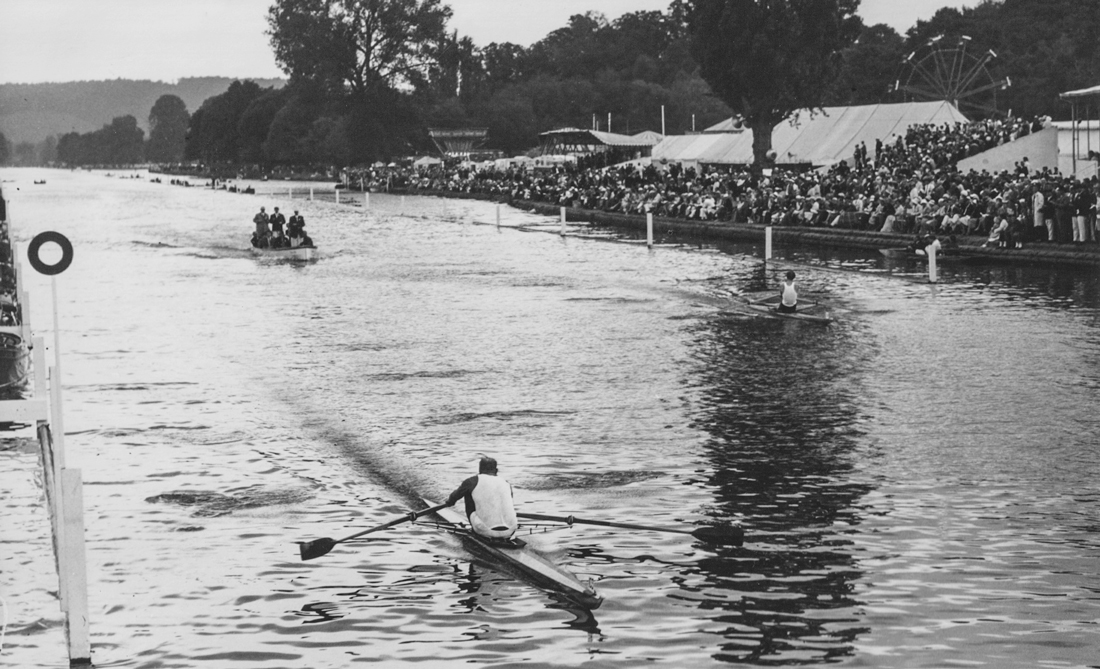 His competitive efforts received some amusing press coverage. A Special Correspondent in the Guardian of Thursday 5th July 1962:

“O Tjurin of Russia in the Diamond Sculls was not seriously troubled …………but D L Thomas (Harrodian) pushed Kottman of Switzerland all the way.”

“Despite cries of “Come on Harrow” an expiring English sculler (Thomas) in singlet and shorts had the life and soul raced out of him by a Swiss swathed from top to toe in tights” (there had been previous reference to icebergs and the unseasonably cold weather).

The story according to The Guardian’s, London Letter the following day, Friday 6th July, 1962 reads:

Old Harrovians who read my reference to cries of “Come on Harrow” at Henley may be wondering when their alma mater took up rowing. A certain West End store has telephoned to say that Harrow does not row, which is true, and that what I heard was “Come on, Harrods” which is not true. The cry might have been “Come on, Harrer”, or just “Come on `Arrers”. Whatever it was, the enunciation was hardly that usually heard in the Knightsbridge area. It is true that Harrods lost the race.”

But with what style!

John is now a Brother at the Hospital of St Cross in Winchester.