Olivia Coffey, who stroked Cambridge to their Boat Race win, is getting set for the World Rowing Championships in Plovdiv, Bulgaria. This year she strokes the W8+ in what will be her seventh World Championships, having represented the United States (US) three times at U23, four as a Senior and as a spare at the Rio Olympics.

With one U23 and two senior World Championships gold medals to her credit, this will be the first time in the eight for Coffrey. The US didn’t medal on home waters at last year’s WRChamps in Sarasota but they still hold the world’s fastest time set in 2013 at World Rowing Cup III.

Having stroked the US W8+ to a bronze medal at World Rowing Cup III in Lucerne, Coffey said she expects New Zealand to be among the toughest competition in Bulgaria, along with Romania and Canada. She told the Star Gazette “I feel like we’ve got a lot of experience and I feel very confident with everybody who’s in the boat. I know they’re strong racers. I know they have had really good results in the past.” 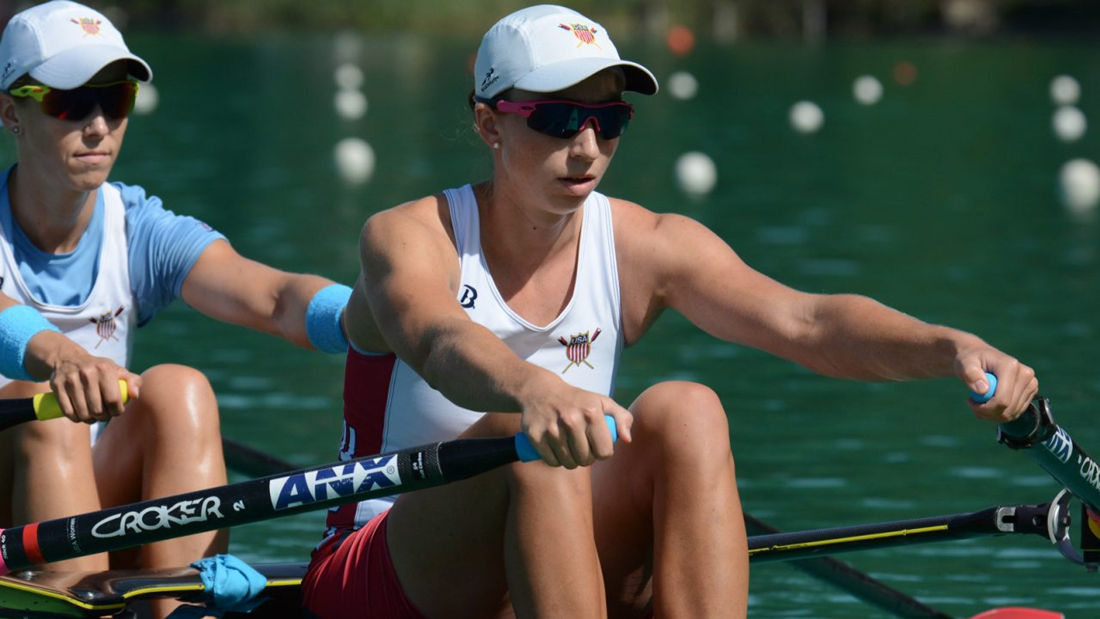 Olivia Coffey in the USA Quad in 2016

The last year or so has been a bit of a blur for Coffey, who arrived in England last September to study at Homerton College, Cambridge as part of a one-year MBA program. In addition to her 9-5 studies, she was also fitting in full-time training with CUWBC which demanded an alarm call at 4.45am for the early morning water session in Eley followed by evening gym-work back in Cambridge.

“I’ve been going full tilt for like 12 months,” she said. “I finished up my degree, I flew back to the U.S. I was here for a couple weeks. I flew back to a regatta in Switzerland, came back here, did the selection. I feel like I just haven’t taken a break yet. But it’s probably better because if I did, my whole body would just kinda …. I don’t know what would happen.”

Coffey was co-captain of the women’s heavyweight crew at Harvard and so no stranger to combining studies with athletic endeavor. However, she says the MBA program at Cambridge was a different kind of challenge. “It was really tough,” she said. “It was a lot tougher than I was expecting it to be, the combination with rowing. Because most MBA’s are two-year programs and they don’t short-change you on anything. They just make you do double the work in half the time.”

Coffey’s father, Calvin, owns and runs the Coffey Corp which produces the SimulatOar rowing machine. He won a silver medal for the U.S. in the M2- at the 1976 Montreal Olympics; despite attending the Rio Olympics as a spare, Olivia didn’t get to compete.

“I’ve wanted an Olympic medal forever,” Coffey tells Star Gazette, “it’s hard to stop doing something you’re very good at when you’re continuing to improve even at the highest level. I feel like I still have room to grow in this sport and I still enjoy it, and I still have a major goal that I’m chasing. So it seems like if I stop now I would definitely regret it later on down the line.”

While the Olympics have been in the back of her mind, Coffey says she hasn’t given Tokyo much thought in such a busy year. She plans to stick with elite rowing through 2020 before turning her attention to a likely career in economics. As for the upcoming races at Plovdiv, she says she’s excited about it, “It’s exciting to be competing at the very best level in the world because you don’t get to do that many times in your life.”

The World Rowing Championships is being held at Plovdiv, Bulgaria September 9-16, 2018 where Coffey will be able to catch up with CUWBC teammate, Imogen Grant who will be competing in the LW1x, assuming she is not required to jump in as spare should an emergency arise.