The mighty Deutschland Achter once again dominated the men’s eights at the World Rowing Championships in Plovdiv. The same crew that won in Sarasota in 2017 continue their reign as World Champions.

It’s worth remembering that this same German crew, which holds the world’s fastest time and was voted World Rowing Crew of the Year 2017, went through another entire season of testing and training picking up 3 World Rowing Cup golds and one European Championships gold with the same athletes, in the same seat positions. An incredible feat in any era of rowing and in sharp contrast to the GB eight which has fielded a different line up at every international. 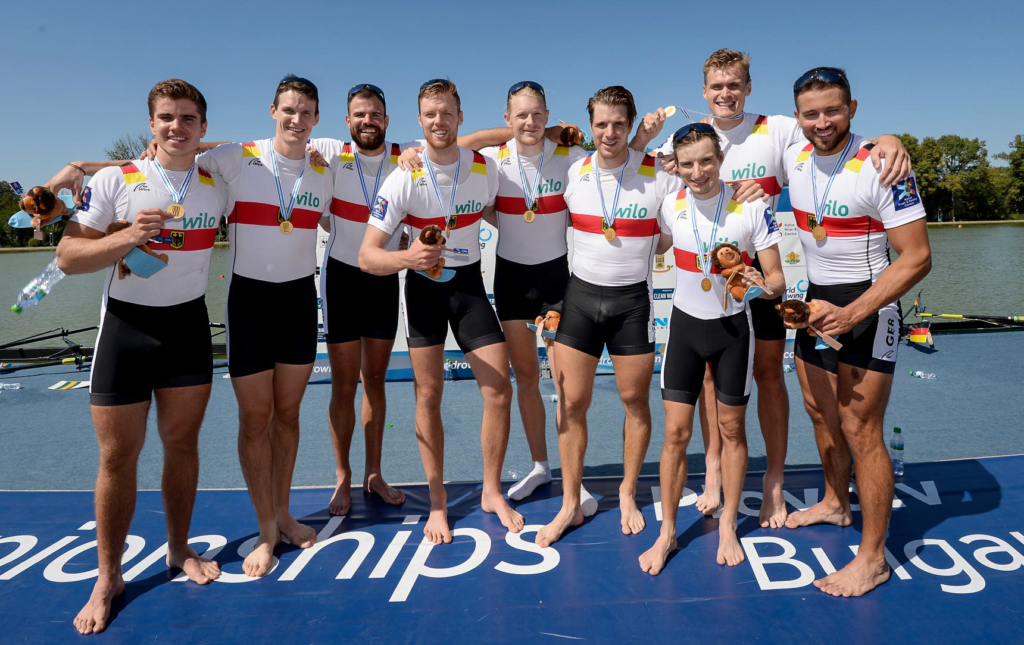 Max Planer (third from left) and the German men’s eight with their medals at the World Rowing Championships in Plovdiv, Bulgaria

Max Planer, 27, is studying journalism at Dortmund University and rows in the three seat. Planer was German national champion in the double at 17 and twice a Junior World Champion. After a disappointing spell in the M4- including a 12th position at the Rio Olympics, Planer and pairs partner Felix Wimberger have found success in the most prestigious of German boat classes.

“Before the race we thought that it would be very tight because the Americans and the Australians were very fast in the other heat.” Planer told WEROW. “By 500m we felt it was going to be a good race for us and after 1,000m our cox, Martin Sauer told us we were nearly a length in front; it was already emotional as we didn’t expect to have such a big lead.”

The Australians went hard off the start but the green Empacher, the colour of Deutschland Achter long time sponsor Wilo, nudged in front at 200m and by 500m the Germans were 0.93 seconds ahead of Australia. “It was hard work as we knew we had to put the best performance we could in the first 1,000m,” said Planer. “We were tired after that but in the end it was worth it!”. Germany doubled their lead over the second 1,000m crossing the line 1.8 seconds ahead of Australia who took the silver ahead of Great Britain.

What would Planer attribute the German success to? “Every nation works very hard, especially this year when they’re all out to beat us. I think this year in the final it was the experience we had before together, two years of rowing in the eight with the same lineup, with a lot of experience, and this experience helps in races like Plovdiv when it counts the most.”

“When you look for next year the other new combinations like the Australians and the British which are already very fast now have this experience and if they stay together may get faster for next year.” Planer says all of the German crew are committed to the Tokyo 2020 journey but acknowledges that there are other athletes pushing for a place in the eight. “For example, Eric Johannesen from the silver medal-winning Rio crew will be coming back into fitness so we have some very good rowers who also want a place in the eight. We have a lot of internal competition.” 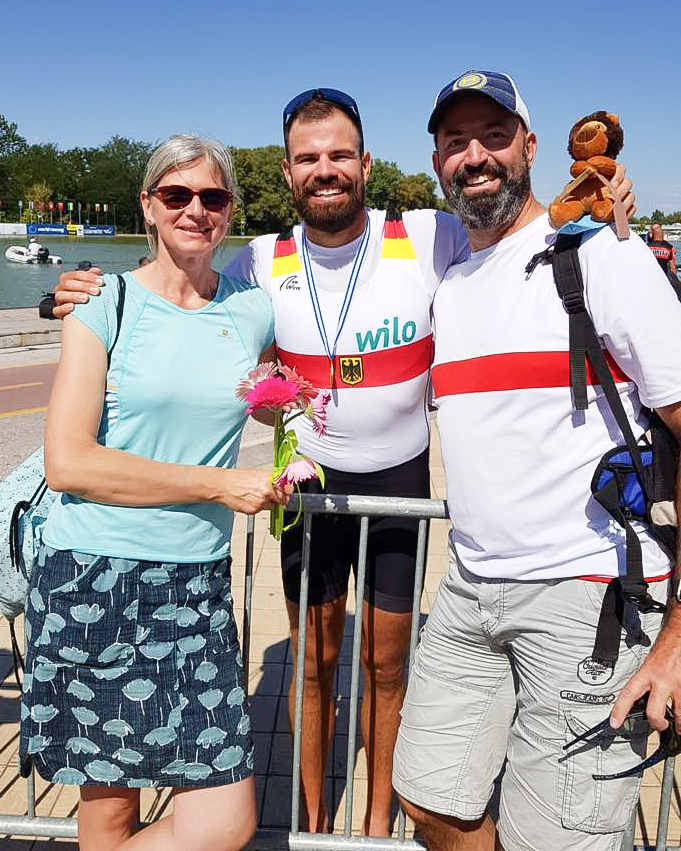 Max Planer of the German men’s eight with his parents at the World Rowing Championships in Plovdiv, Bulgaria

Planer is very much focussed on securing a place for the Rio Olympics and as a result has had to expend his studies another year in order to complete his thesis. Although a student and full-time athlete, he is funded by the Army and will shortly being completing an eight week period of military duties before returning to full-time training. “Whilst on military duty I will have to train like a British rower, with long sessions on the erg!” he jokes.

“I started this process training six or seven days a week in 2004 and there’s been a lot of hard times but the last two years have been the best so far so the focus now is my rowing. After the disappointment of Rio I couldn’t have imagined this period of success.”

Next stop for Planer and the Deutschland Achter is the SH Netz Cup where the Germans are defending their title against Dutch, British and American crews in Rendsburg, North Germany. The SH Netz Cup starts on Friday and runs for three days.