Mahé Drysdale will be packing up and heading to Henley Royal Regatta today after a weekend of racing in Amsterdam on the Bosbaan. Drysdale spent the weekend competing at the 125th edition of the Holland Beker regatta.

With a blustery headwind blowing for most of the weekend, times were slow but both Drysdale and World Champion, Ondrej Synek, who were at each end of the draw, won their heats comfortably. On Saturday afternoon both went on to win their semi-finals and on Sunday the Czech secured victory in the final by 4 seconds over the 5 times Henley winner. Julius Peschel, a German lightweight from the 2017 LM4- was third, some 34 seconds off the winning pace.

Synek said of his win “It took me a minute longer than last year. It was a tough race. But I love it here, it is my second favourite course, and I’m really happy to be back”. Drysdale, who got off to a slow start in the final owing to the waves said, “It was good to have some tough racing, probably a bit frustrating out of the start, but it was good that I managed to turn it around during the race. It felt like I finished strongly”. You can watch the race here – drop in at 06:30:03

The run-up to Henley Royal Regatta has not been smooth for Drysdale. After picking up a cold on the way over to Europe, Drysdale withdrew from World Cup II in Linz with breathing problems. After moving to Munich with the New Zealand team, Drysdale wrote off a ten-day-old old Filippi custom single when he T-boned some kids in a double whilst practising his starts. Drysdale said, “Thankfully nobody got hurt. I have my backup boat, which is the boat I rowed in Rio, so it’s not a bad backup boat to have” 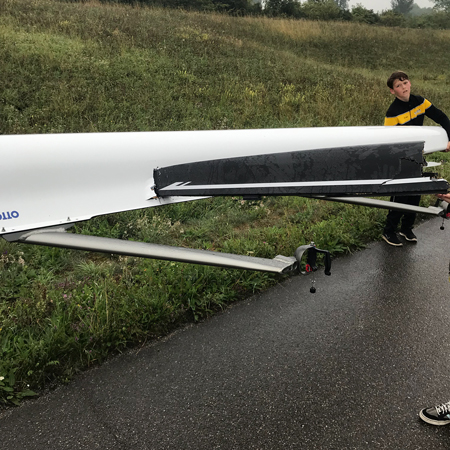 Drysdale is not racing at Henley until Friday when he will meet either Petter Tufte of Norske Studenters who was 40 seconds off the pace in the M1x Holland Beker final yesterday or Harrison of Reading Rowing Club. The first test for Drysdale is more likely to come on Saturday when he may meet Tom Graves of the Craftsbury Sculling Centre USA. In the other half of the draw, he will be facing the likes of Charles Cousins, Jamie Kirkwood and Norwegian Olympic silver medallist, Kjetil Borch.

Much has been written about Drysdale’s comeback after a 12-month post-Rio break. Both Drysdale and Robbie Manson will be at World Cup III in two weeks representing New Zealand and the winner will most likely secure the seat for Tokyo 2020. As Drysdale himself has written, “Whatever happens the most important moment of my comeback so far will happen on the 15th July at 11:48 am and by 11:55 am we should all know if I have achieved the first step or not.”

Drysdale has won at Henley five times in eight previous trips to the Thames. A sixth win seems unlikely given his form at home this season but Drysdale is a master of timing his athletic peaks and whatever the result, it will be exciting to see the reigning Olympic Champion at Henley, possibly for the last time.

All our images from Qualifiers can be found here.