This weekend was the highlight of the university rowing calendar with BUCS Regatta held over three days at Holme Pierrepont, Nottingham. The event is the only opportunity for universities to compete against each other and for every level of rowing ability to compete against matched crews.

Last years BUCS was dominated by Oxford Brookes who went on to win the Ladies Plate and Temple Challenge Cup at Henley Royal Regatta and to make the final of the Academic Eights at Henley Women’s Regatta where they were beaten by Newcastle. This year, the Brookes women had to share the Victor Ludorum (VL) with Newcastle University Boat Club whilst the Newcastle men took their VL outright. 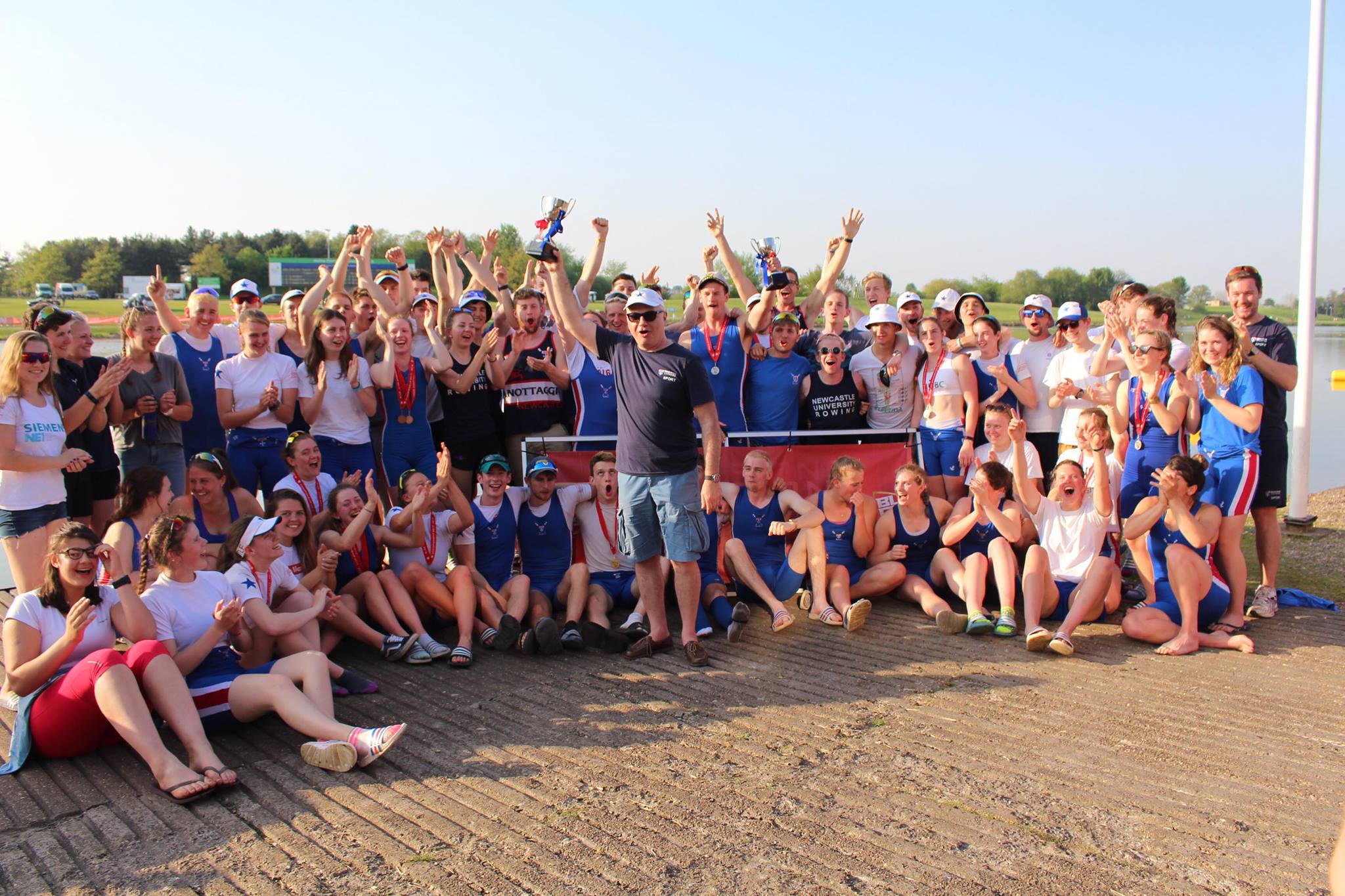 Whilst Newcastle didn’t win the VL with a clean sweep of medals in every event, winning the overall VL is totally fitting for a club that values participation and teamwork above individual glory. Newcastle head coach, former Italian international coach Angelo Savarino, thinks that personal excellence is definitely to be encouraged but that to achieve it you need the help of the team.

“We didn’t target the VL, but it comes as a consequence of the crews’ desire to do very well and the majority placed in finals and gained some points. But there is one element that separates Newcastle and that’s the incredible support that the athletes have for each other both on the water and from the  bank.” Savarino says there is a very strong sense of belonging in the club. This is evidenced in the video of his crews singing “Take Me Home” whilst dancing in the Nottingham water which has been doing the rounds on social media.

For Savarino the stand out performances came from the lightweight men’s eight who took gold ahead of Oxford University and Bristol University; the men’s lightweight quad and the lightweight four who also won their events. “These wins were built off the back of taking first and second places in the Lightweight Pennant at the Head of the River in March,” says Savarino.

Savarino is at pains to point out that everyone is welcome in the Newcastle boat club. “We will never cut numbers, as long as the athletes are committed, but regardless of ability we encourage everyone to join. If someone is very talented that will come out but we all train together so there is respect from the top to the bottom and everybody pushes each other. We never speak about winning – we speak about fulfilling our full potential – so you set your target and you do everything in your power to reach that target.”

The BUCS highlight for the Newcastle women’s squad was winning the Championship Quad. Leigh says the crew of  Frances Russell, Lola Anderson, Amy Bowman & Fiona Chestnutt went in as underdogs but it wasn’t so much winning the race but the way the crew rowed it. “They were down to the University of London (UL) by a length and a half at 500m out and they hung in there and managed to win by a length,” says Leigh. “Even if they had lost by a foot and got silver I would have been just as proud of them. The courage they showed doing that was pretty special – credit to UL who have developed some phenomenal athletes but for us, the victory was being up there with them this year.”

Leigh says that bronze in the women’s Championship Eights was also very special. “It’s been a few years since we medaled in that event. Having been off the pace most of this year in the eight, it was good for the girls to show that they can mix it with UL and Brookes who are both excellent crews. So for us winning a bronze medal was about as good as it could have been.”

Newcastle now head home to make plans for Henley Women’s Regatta. Leigh says that the win in the quad is obviously a factor as he has five outstanding athletes available for the summer. “With the bronze in the Champ Eights and gold in Intermediate eights, we will also be looking at having another go at the Academic Eights at Henley Women’s Regatta. We’ve won the last two years and I think the girls are very keen to have a good crack at it.”

For the men, Savarino is not facing such a clear path to Henley Royal Regatta. “We are a small squad and so it’s quite challenging to compete with big heavyweight crews. We have three returning athletes who won the Prince Albert (student coxed four) last year so they are eligible for the Temple and we would like to challenge Brookes and Imperial to be the best. It’s not going to be easy and we will be working very hard in the next few months to reach this target.”