Kaila Engelsman of the Mortlake Anglian & Alpha Boat Club (MAABC) won the Open Women’s 2k at the British Rowing Indoor Championships (BRIC) on Saturday in a time of 7:01:6. A super-bright Australian, Engelsman started rowing a little over 18 months ago and is now completely hooked. She spoke to WEROW about her excitement competing at BRIC, her love of numbers and her plans for the 2018 regatta season.

Engelsman beat her nearest competitor at BRIC, Jessica Day of the Isle of Eley Rowing Club by 12 seconds. “I am so close to cracking seven minutes. On the erg I am obsessed with counting numbers. Some people watch TV or listen to music – I count and calculate. So on Saturday with 300m to go, I realised I was probably going to miss 7 minutes. It was such a good experience though; I was quite nervous, but I had a good race plan and when you’re out on the floor with the big screens behind you, you feel a bit like a rock star! One of our senior coaches, Geoffrey,  passed away recently and I had a little voice from him in my head, ‘just push a little bit harder, it’s going to hurt anyway’”. 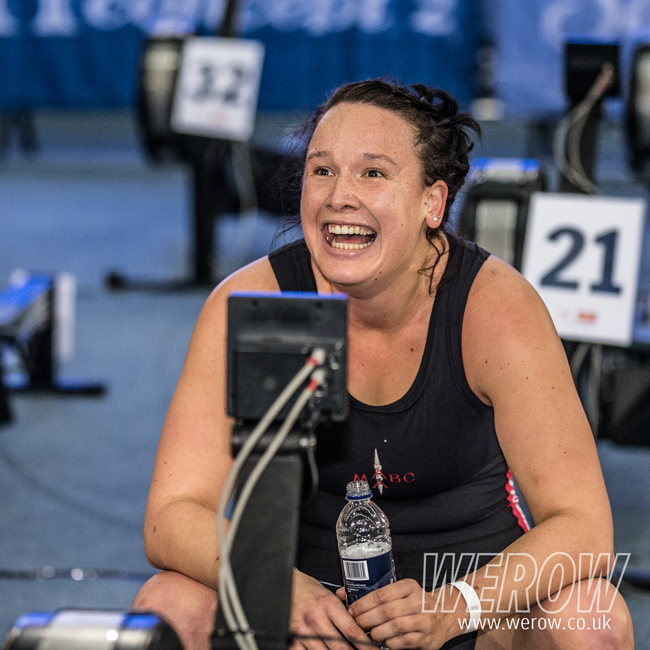 Engelsman, 26, moved to the UK from Australia in 2016 seeking a change of pace with no experience of rowing. A chance encounter with Nicola Dale, Captain of MAABC in a pub changed everything. “I was doing some bar-tending part-time, and one day Nicola walked in for a casual white wine and noticed that I am a bit taller than the average woman at 6ft 3in. She asked whether I would be interested in rowing and as it was the weekend of the Oxford & Cambridge Boat Races, peak rowing time, I thought ‘why not’? The idea of rowing on the River Thames seemed really majestic and calm, but I have since learned that the Tideway is rarely like that.”

Growing up in a non-rowing family on the Gold Coast of Australia, Engelsman has a British grandmother. A very bright student she finished her A-levels aged 16 and then studied for two degrees contemporaneously, graduating with degrees in law and accounting at the age of 20. She now works as a Transfer Pricing Consultant for London lawyers, Hogan Lovells. “Not even my parents understand what I do – I specialise in economic analysis relating to the international taxation of corporate clients but I usually just tell people that I do excel spreadsheets!”

“I started at MAABC last March and I really love it – rowing is so hard but really rewarding, and the whole club is so supportive. I first learned to row in the single before I progressed into the infamous MAABC novice coxed quad, and then in January this year, I started sweep as well. I don’t fall out of my single as much these days but I did spend a fair few of my earlier sessions taking chilly swims in the Thames. Now I am just trying to build up experience by doing every race they will let me enter.”

Engelsman competed in the head of the River Fours coming 9th in the Band 1 W4x and then last month came second in the Senior W1x, 12 seconds behind the winner, Jen Titterington of Sudbury Rowing Club. She was excited to do the race in her new single scull. “I recently found my own boat – I was so excited to find a second-hand heavyweight Wintech scull for sale, as I needed a slightly bigger boat than most of the girls at my club and had been struggling to find a good fit. I got in touch with the seller via the website really easily, a lovely guy from Ireland who drove it all the way to London for me.”

“Next year I just want to keep getting better and compete at as high a level as I can – I would love to go to Henley Women’s Regatta and do well. Because I am so impatient and very driven, it’s straight back to training now to make that happen. In training our squad’s favourite pieces are hour-long ones at rate 16 with a drag factor of 130 (but I usually go a little bit higher about 132 as I am heavier than the rest of the squad), trying to keep our heart sitting below 150bpm. I get hyper-focused on the numbers, listening for the sound of the flywheel. And I have to reveal I have a nerdy spreadsheet to track all my workouts – it’s huge – there are so many numbers that it looks like the Da Vinci code, but it probably wouldn’t make sense to anyone else but me!”