John Collins is a member of Leander Club and part of the British Rowing squad heading to the World Rowing Championships in Sarasota later this month. Now a sculler with a wealth of  Olympic, World and European experience under his belt, Collins form showed early when, together with Tim Male he won the Pairs Head aged just 17. We sat down with John at Leander Club to talk about the journey to Sarasota.

John Collins, 28 was educated at Orleans Park, a co-ed secondary school in Twickenham, West London. Despite the proximity the school to the Thames and having Sir David Tanner, Performance Director at British Rowing as a Governor, the school does not row. “I was remarkably untalented at throwing, catching and running” says Collins, “which means I’m pretty dreadful at most sports although I was able to use my size in rugby”. Collins discovered rowing though the Duke of Edinburgh Award Scheme (DOE). 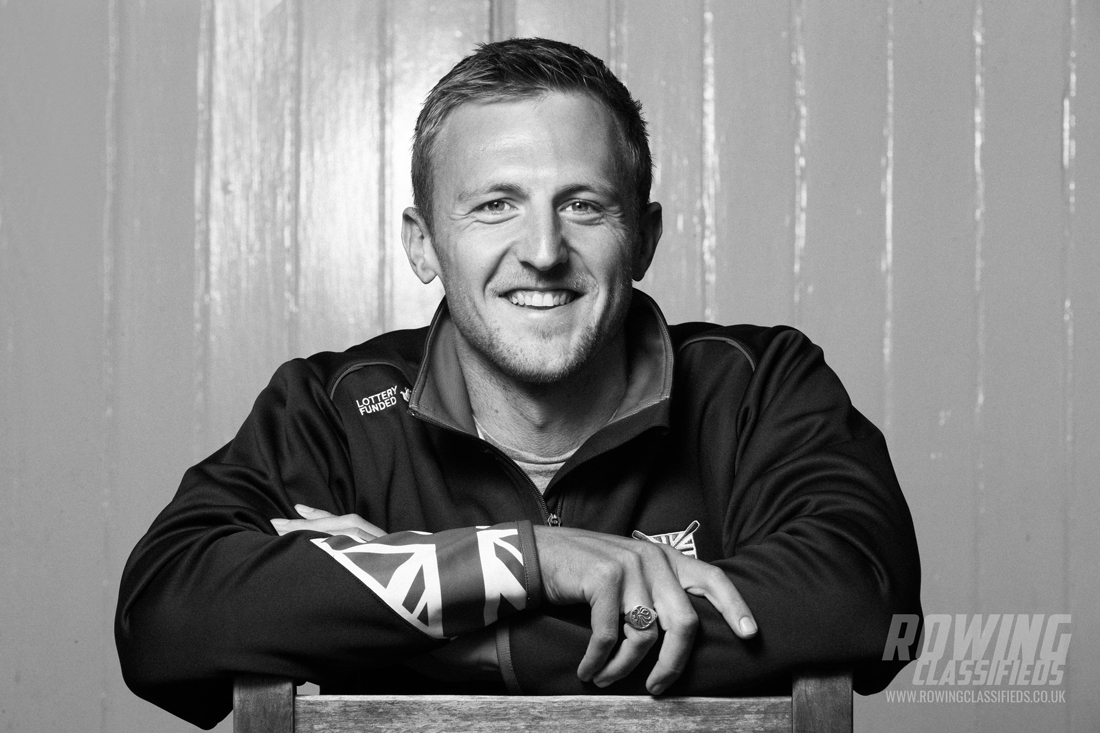 Having discovered his athletic talents lay in rowing John’s academic life started to seem less important. “The more I got into rowing, the more I used it as an excuse to not do my schoolwork, much to my parent’s frustration. I used my training as an excuse not to work which with hindsight I now regret.”

After 18 months at Putney Town Collins moved to Tideway Scullers where at 17 he won the  Pairs Head in partnership with Tim Male. After 2 years Collins moved on again this time to Reading University Boat Club. Collins did not attend the university, and neither was he enrolled on the club’s World Class Start Program, but liked the coach, Don McLachlan. McLachlan, a native of New Zealand later went on to Imperial College and Rowing Ireland and is currently at Sydney University Boat Club. “Don was the coach that moved me on and encouraged me to mature as an athlete”.

“Progressing in the sport was my goal so I was supporting myself by doing part time work locally and a lot of help from my parents whilst training pretty much full time.  To my horror Don sat me down one day and told me that he thought I should stop. He just said, “I don’t think your heart’s in it. We’re meant to be on the water at 7:00 and you’re turning up at five to, throwing on some kit and jumping in the boat without any stretching or prep.” I was shocked but he was right. I wasn’t investing myself in this properly. I didn’t need to be training harder but smarter otherwise I’m just wasting my time. That was a real wake-up call for me”.

Collins developed as an athlete but defeats twice at Henley Royal Regatta by Leander Club crews made him reconsider his position. “There were two occasions where we should probably have probably won, but on both occasions were beaten by the Leander crew so they were obviously doing something better than us. Collins joined Leander in 2010 under coaches Matt Beechey and Chris Collerton, both seasoned GB rowers.

“It was a bit of a strange experience coming from a tideway background where Leander was the enemy, but the longer I’ve been at the club, the more I’ve realised that it’s such a simple step to make if you want to do well in rowing. It’s not comparable to any other rowing club I’ve been to.”

“To be near Leander I moved to Henley which I love. I never used to be much of a coffee drinker but I woke up one morning and really struggled to open my eyes, I was so tired from training. I wandered into the kitchen at the back of the flat and fired up my housemate’s coffee machine and just as the last drop of coffee filled the cup I heard an enormous crash.  The scaffolding on the Clarks shoe shop opposite had been knocked over by the bin men and came crashing into my bedroom window. I had a lucky escape so I now always have a cup of coffee in the morning without fail!” 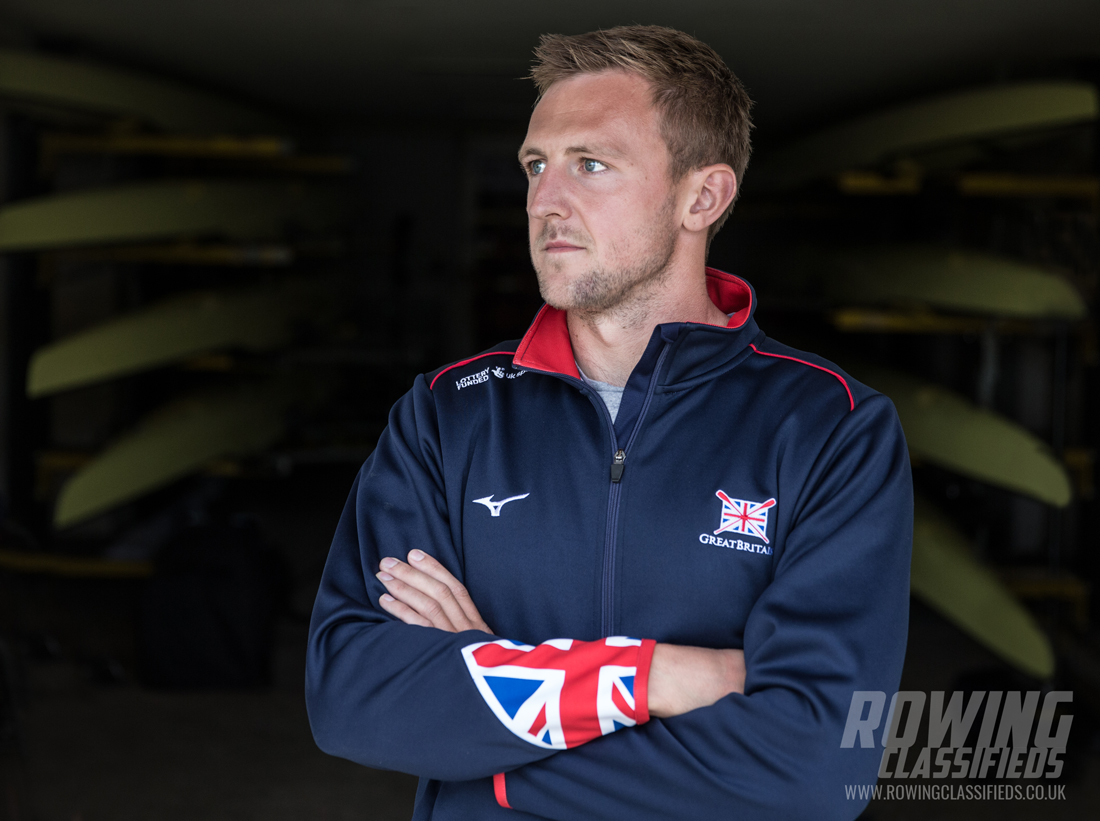 Now a senior member of the British Rowing men’s squad Collins has two U23 World Championships and five years of senior international competition under his belt. “I love being a full-time athlete, to be honest I don’t really know much else. But it’s very straightforward. A lot of people think it’s hard, but you go out and repeatedly apply yourself to making one particular movement better. The training is hard and tough but it’s very straightforward.”

Domestically Collins has amassed a wealth of wins starting with the outstanding Pairs Head performance in 2006. Subsequently other notable wins have been at the Fours Head on four occasions, at Henley Royal Regatta – the Prince of Wales Cup in 2011, Double Sculls 2012 & 2015, Ladies Plate in 2013 setting a course record and this year the Queen Mother setting another course record with his current squad crew.

This year has seen Collins move from his long-standing partnership in the GB double scull with Jonny Walton and into the quad alongside Leander team mates Jack Beaumont, Peter Lambert and Walton. Tom Baras started the season in the quad before being moved into a single, being replaced by Peter Lambert.

At the Rio Olympics Collins and Walton raced the double coming 5th in an event dominated by Croatia’s Sinkovic brothers. “Making the Olympic Final with Jonny was the best moment of my career and perhaps in my life to date. I couldn’t even speak before the race I was so nervous and all the emotion that gets bottled up was just let out then – it was very special moment. Then rowing back past the supporters going mental was absolutely incredible and also quite humbling.”

“Coming back from the Olympics without medal was so tough. I think the biggest thing I felt was guilt – the people that supported me, it’s for them that you feel bad. And I think we know that having the race we had in the semi-final of the Olympics, that was as close to perfect as we ever got. To have had that race and not to come away with a medal meant that we were coming home empty-handed to our families who had supported us blindly through the whole thing. Our friends and families were so proud of us and put everything into supporting us and to not be able to give them a medal back made it all feel very one sided. All the public sees is the medals. Not many people see what we did in that the semi-final because it is just a semi-final to them. But for us it was the fact that we pushed the fastest double of all time so hard. And that was almost as good as a medal in itself. So yeah, it’s a tough one. It’s amazing how a piece of metal makes all the difference!”

“And now, in the quad, we’ve had some successes, like in Belgrade (2017 World Cup 1), where I’d say our final was distinctly average. But we got a bronze medal and everyone’s telling me that’s incredible but it almost felt a bit hollow in comparison. It’s a very strange thing.”

This season has seen the quad take 3rd place at World Cup 1, 1st at World Cup 2, 4th at the European Championships and 2nd at World Cup 3 in Lucerne. They beat a fast New Zealand crew at Henley Royal Regatta but Collins is in no doubt that the Lithuanians will be the ones to watch at the World Rowing Championships.

“This is probably the first time we realistically are going into this looking to win a medal. I think if we get every aspect of it right, which I know we can do, and it’s a lot easier said than done, but if we get it right I do think that we are a good colour medal prospect. The Lithuanian quad is going be a very, very difficult boat to overturn. But not impossible. They are just four blokes and I’ve seen videos of them rowing and I’ve picked a lot of holes in it. I know they could very easily do the same to us, but I do think that we can compete. We had a lot to work on prior to the training camps that’s for absolutely certain but training has gone really well so now it’s down to mindset.”

Collins and his crew have been training at high altitude camp in Silvretta, 2,100m up in the Austrian Alps along with the rest of the British Rowing men’s squad . After a few days break in the UK the squad then embarked on a two week finishing camp in Avis, Portugal prior to heading for Sarasota.

“We never had an easy Regatta. It was always hard. And I think the reason we won that medal in the double at Poznan (2016 World Cup 3) was because it was the first time we actually got to a final without murdering ourselves in the qualifiers. When Jonny and I were qualifying for the Rio Olympics in the double it was the 2013 World Champions who didn’t make it – going into the race there was a second and a half between all six crews and last place didn’t qualify for Rio. Being in those situations is the more character building thing anything”.

Through the ups and downs of John’s rowing career his relationship with his father has been key.  John leaves all his medals with his parents in order to keep him facing toward the next race. The prospect of bringing home an Olympic medal is what drives him on. “My dad is a bit of a rowing nerd. The thought of being able to hand him a medal, someone who knows what they’re looking at, would be very special”.

Collins loves squad life and is extremely pragmatic about his career choice. “We’re not rowers for fame and fortune – It’s a dream I had from very early on of course but at the same time I didn’t know what else I was going to do, that’s why I’m here. Caversham is just full of probably the most stubborn people in the nation. I think that’s all that separates us from average people – we didn’t give up when a lot of other people did. Because I know that, for every good result I’ve had, I’ve had dozens of very bad and very average ones. I’ve been beaten by a lot of people who just gave up before me and who were consistently better than me until they stopped.”