Irish pedigree shows at Head of the Charles 2017

Saturday was day one of the Head of the Charles with near perfect conditions and clear skies. Ireland had strong representation in the Championship Doubles with Gary O’Donovan, 2016 LM2x Olympic Silver medallist, sculling with Paul O’Donovan, LM1x World Champion in 2017 & LM2x Olympic Silver medallist in 2016. Reigning World Champions in LM2-, Mark O’Donovan and Shane O’Driscoll swapped their oars for sculls for their HOCR outing.

Gary & Paul finished second in the Men’s Championship Doubles to Justin Keen of Penn Athletic Club & Erik Frid of Craftsbury Sculling Center, both of whom represented the USA in the men’s quad at the recent World Rowing Championships.  The O’Donovan’s lost by 1/10th of a second to, as Paul puts it, “the guys from Philadelphia where they make the cheese”.

Gary & Paul O'Donovan back together again on the day Azou announced his retirement - Martin & Stahlberg were leading but stopped 1kb4 finish pic.twitter.com/IHexQHGAJO 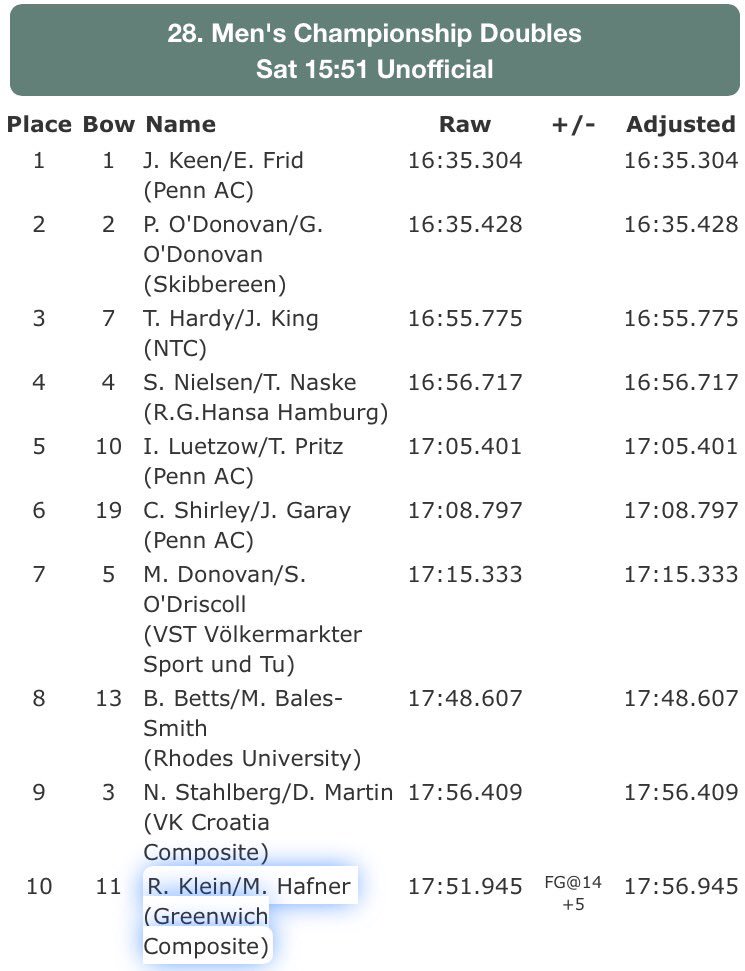 Mark O’Donovan & Shane O’Driscoll came a creditable 7th. Gary says of the LM2- World Champions, “To be fair, to give the guys credit they were coming from a sweep boat, they’ve been sweep rowing all year and this is their first time sculling in months”. Paul takes up, “This time they had two oars so they were doing half the rate!”

Shane says that the course presented no steering issues for them as they are used to monthly 8km races back home in Skibbereen on the Llen River. Gary say’s that after last years steering problems they had a much better run at it after practising on the course. “We still managed to make a mess of the last bit and I think that’s what cost us that little bit of time but what can you do. We will learn again for next year hopefully we’ll be back”.

At WEROW, we’re looking forward to that possibility already!