India has won it’s second ever rowing gold medal at the Asain Games but has reportedly fired their national coach, Nicolae Gioga. Trouble has been brewing between the Rowing Federation of India (RFI) and Romanian coach Gioga for some time. Gioga cites lack of commitment from his athletes and the RFI bad relationships between coach and athletes.

The Asian Games, which have another week to run, are being held in Jakarta, Indonesia with the rowing events being held in the first week of the games.  Indonesia won a historic five rowing medals including one gold, but the hosts have not been without criticism. Amnesty International estimates that 70 people were killed by police in a crackdown on petty criminals prior to the games.

India qualified for five finals on the Friday of the games but didn’t win a single medal. Gioga had been aiming to return to India with 7 golds but instead reaped only one gold and two bronze medals from the Saturday finals.

Single sculler, Dattu Bhokanal who won the C final in Rio, capsized before even getting to the start having forgotten to close his gate. Bhokanal, who can’t swim, apparently had a respiratory problem contracted from his roommate which made him feel lightheaded. The India sculler produced a lacklustre performance to finish eighth in the final which was won by China’s Liang Zhang who won the D final at World Rowing Cup III in July. 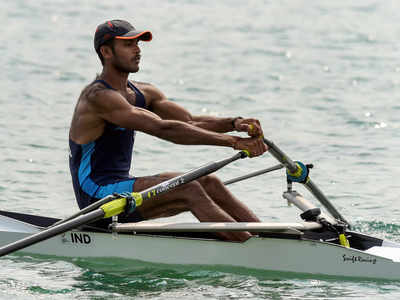 Success came to the Indian quadruple scull comprising two former Olympians, Sawarn Sing and Dattu Bhokanal together with Om Prakash and Sukhmeet Sing. The quartet won gold coming from behind to overtake the race-leaders, Indonesia. Sing was making a comeback after being treated for a disc bulge having won Bonze for India in the Asian Games 2014.

After collecting his gold Bhokanal said “I am a relieved man after this win. This is a life-changing medal. A lot was expected of us rowers at the games and I was personally disappointed after the single’s failure. We rowers had vowed to win gold at any cost for India. I am glad that we could.” 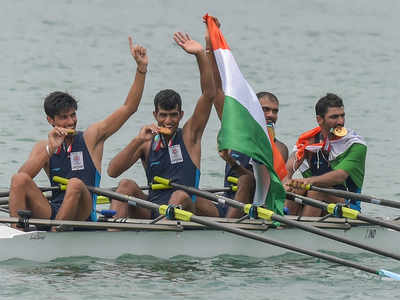 Despite this success coach Gioga has reportedly been sacked. Having previously helped the Iranian and Chinese rowing squads, the 66-year-old Romanian was drafted in to help India qualify for the Tokyo Olympics in 2020. He has been working with a squad of 40 Indian rowers at the Army Training centre in Pune on India’s west coast.  Gioga told the Times of India on Saturday “I came with the goal of winning seven gold medals. I have only won one. What kind of result is this? This is a black mark on my CV.”