Skip to content
Henley Royal Regatta – some highlights for Wednesday

At last, it’s here – for all its faults still one of the greatest rowing events in the calendar and for many athletes the pinnacle of their rowing career. Racing at Henley Royal Regatta kicks off at 9.00am tomorrow and by the end of the last race at 7.40pm, 83 crews will be heading left off the pontoons and straight back to the boat trailer. Here are a few highlights from tomorrow’s program:-

Princess Elizabeth Challenge Cup
Race 28 will see two of the biggest junior names come face-to-face on the Henley stretch, with Eton battling it out against Hampton. Eton, semi-finalists in last year’s Princess Elizabeth Challenge Cup, will be looking to go one better this year in a side of the draw that also contains Bedford School and St Joseph’s College Nudgee, of Australia. Hampton’s first eight failed to make the finals at the National Schools’ Regatta but half of their crew for Henley Royal won a bronze in Championship Coxed Fours at Dorney in May. The sensational St Pauls Crew have been given a day off and will race the winners of Race 74, King’s School Canterbury v Abingdon on Thursday. 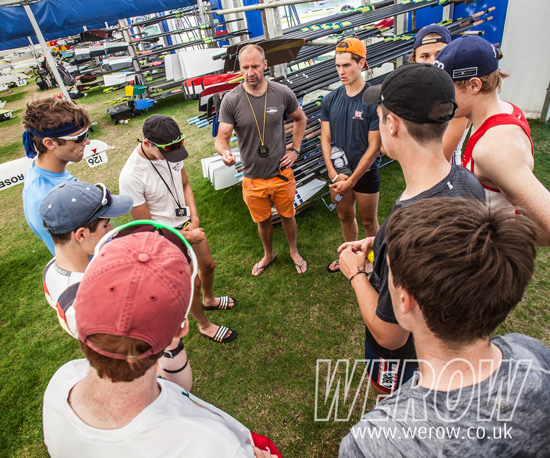 The Temple Challenge Cup
Race 56 may well be one to watch. Washington will provide a boat for the competition made of members which formed the first, second and third Varsity crews over in the USA and will face Oxford Brookes ‘B’. Technically this is Oxford Brookes C, given their crew in the Ladies and the second boat, favourites to win and holders, Oxford Brookes ‘A’ who go off in Race 68 against University of San Diago. Race 36 brings us an all-American encounter between Temple University and Yale University. Although this isn’t Yale’s Varsity Eight, the depth of their program suggests a strong showing from Steve Gladstone’s bulldogs. Namesakes Temple University haven’t raced here for a number of years but earned themselves pre-qualification due to a win at the Dad Vail Regatta earlier this season.

The Fawley
A selection of St Paul’s School second-crew athletes have committed to the quad and are leading the charge against Star and Arrow tomorrow. In a race that is sure to demonstrate the continued elevation of schoolboy sculling, two reserve crews go head-to-head in a battle that will surely go the distance.

The Prince Albert Challenge Cup
The Prince Albert Challenge Cup for student coxed fours consistently produces some of the Regatta’s tightest racing. Imperial College, who lost out in the final last year by 2/3 of a length, are back in 2018 with a new-look crew and renewed conviction to take home the trophy. Their opponents, Grand Valley State University of the USA, have travelled across the Atlantic to compete on Henley waters but could be staring down the barrel of defeat as the home favourites look to flex their early racing muscles. catch the race at 3.45, Race 54.

For a comprehensive breakdown of the crews head over to The Fat Sculler, AKA Daniel Spring for his comprehensive Henley Royal Regatta Review.