Carlotta Nwajide is competing for Germany at the World Rowing Cup 1 in Belgrade where she will be racing in the double scull. Now in her second season in the senior team, Nwajide has two Junior, three U23 and one Senior World Rowing Championships under her belt. She won bronze in the single at the U23 World Rowing Championships in 2016, since when she has been sculling in crew boats. Nwajide has the mature demeanour of a seasoned and dedicated athlete and has her sights firmly set on Tokyo 2020.

Carlotta Nwajide and Franziska Kampmann of Germany at Essen Regatta

Nwajide is part of the women’s sculling squad based at the high-performance centre in Berlin. She is coached by head sculling coach Marcin Witkowski, who coached the Polish women scullers at Rio in 2016 before joining the German team in 2017. Nwajide spends four days a week living and training with the squad at the centre and the rest with her home club, German RC of 1884 eV, in Hanover making the 2 1/2 hour commute by train every week.

Currently in her third year at Leibniz University in Hanover, Nwajide whose mother is German and father Nigerian is studying physical geography. She joined the army in 2015 and being an elite athlete was allowed to both study and compete whilst drawing an army salary. In return, she has to spend time once a year fulfilling army duties. 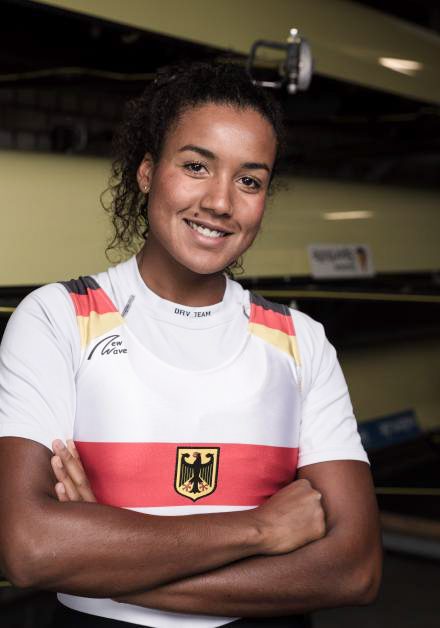 At the final trials at Hill Regatta in Essen, Nwajide partnered with Michaela Staelberg (Crefelder RC 1883 eV) for the Saturday racing and beat the Czech Republic by half a length. On Sunday head coach Witkowski, swapped Franziska Kampmann (RC Waltrop 1928 eV) in to partner Nwajide and was so impressed with the duo that they remained a partnership for the first World Cup. They won the race by 3.5 seconds over the Czech pair of Lenka Antosova and Kristyna Fleissnerova who have previously beaten Nwajide in Sarasota.

Nwajide new doubles partner, Kampmann, competed as an U23 last year coming third as part of the German quad to GB’s winning crew of Anna Thornton, Charlotte Hodgkins-Byrne, Saskia Budgett and Lucy Glover. They will face the Czech double again in Belgrade this weekend as well as the Lithuanian double of Ieva Adomaviciute and Milda Valciukaite who came fourth in Sarasota. The pair are coached in the double by Czech, Přemysl Panuška who previously coached the Czech national team.

“I feel well prepared, it’s always difficult to say how well that translates into the competition because you don’t know how your opponents are, how well prepared they are,” Nwajide told WEROW. “The work that Franziska and I have done has been good so I feel good.”

Nwajide and Kampmann have been based at the Berlin training centre for 10 days prior to leaving for Belgrade. She is part of a 41-strong team which includes 12 female scullers and on sweepers. Annekatrin Thiele, who beat Vicky Thornley in strange circumstances (drop in on the race video at 3:35) at Henley Royal Regatta last year, secured the single slot early in the trials process. The men are led by reigning World Rowing Champions, the Deutschland Achter in an unchanged line-up containing Max Planer featured on WEROW earlier in the year.

“We arrived in Belgrade on Wednesday night and we spent the evening setting up the boats and a short paddle. Today we will do some light training then we are ready for the competition. I find it quite frustrating to be isolated in the hotel away from the course but it’s part of the preparation to get focussed for the competition. I would prefer to be closer to the event so that we can get a feel for the atmosphere of the event but we need to conserve energy!”

The World Rowing Cup 1 starts on Friday and the finals will be televised on the BBC from 1.30pm on Sunday. We will be following Carlotta’s progress all the way to Tokyo.