The European Rowing U23 Championships in Brest, Belarus concluded yesterday with Romania topping the medals table with a haul of eight gold medals from 13 events entered. Greece took five golds from their 9 events with Germany taking four from 14 events.

Gavin Horsburgh of Edinburgh University put Great Britain’s only score on the medals table when he took bronze in the LM1x. German sculler, Simon Klueter who was part of the LM4x at the U23 WRChamps in July won gold ahead of Austrian Rainer Kepplinger who placed fourth in the same event at the U23 WRChamps. Horsburgh was World Champion in the quad as a Junior in 2015 and as an U23 in 2016.

The British pair were among the favourites for the race but despite a great start finished the race in fourth place in a tough field. The Romanian crew of Dumitru and Lehaci, who were silver medal winners at the U23 WRChamps led from the start and despite being pressured by the Polish crew in the last 500m, held onto the gold medal.

Elsewhere, Bath University athlete and former doubles partner to Steph Clutterbuck, Laura Macro finished 5th in the LW1x. Tideway Scullers’ Katy Wilkinson-Feller won her B Final in an event won by Desislava Georgieva of Bulgaria who had finished in bronze medal position at the U23 WRChamps.

James Stevenson and Dominic Jackson of Newcastle University in the LM2x spent most of their final sitting in third place, moving into second after 1,500m. With 250m to go the more experienced Austrian and Swiss crews overpowered them leaving the British double to settle for fourth. 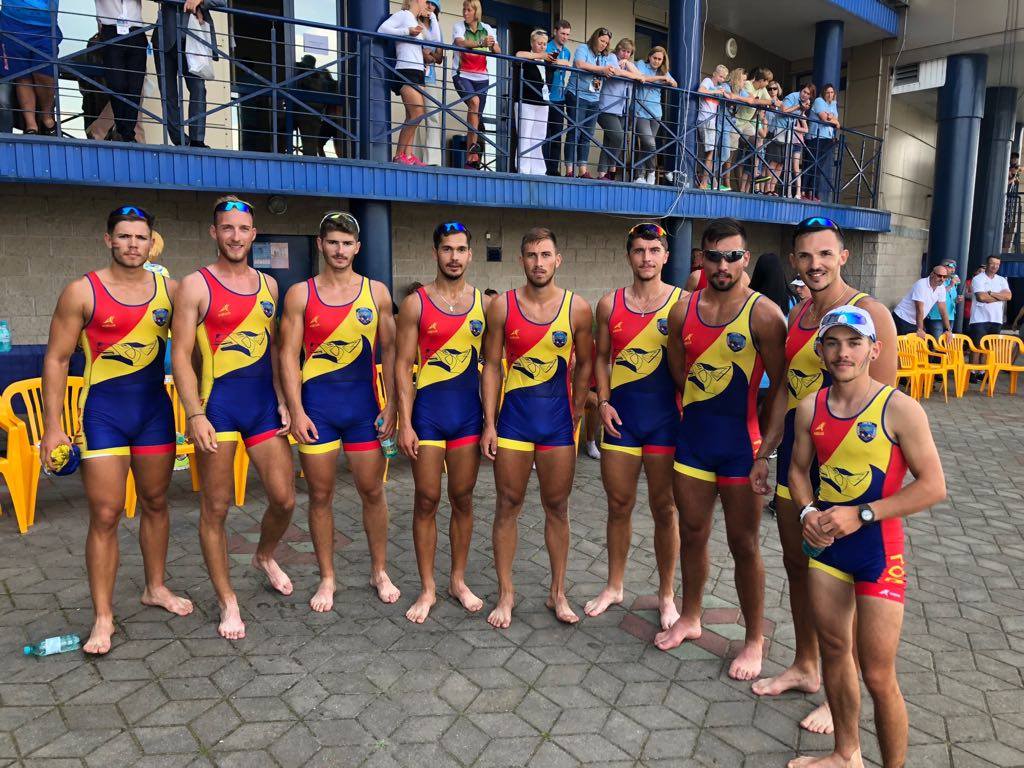 The winning Romanian men’s eight at the European Rowing U23 Championships 2018 in Brest, Belarus

Rory Harris and George Lawton of Reading University won the B Final of the M2x and George Bourne of Durham University fought for a creditable fifth place in the M1x final, won by Romanian, Mihai Chiruta.

Rachel Heap and Meghan Slabbert of Leander and Molesey Boat Club were fifth in the W2-. Their event was won by the young Greek crew of Maria Kyridou and Christina Bourmpou who old won gold at the Junior WRChamps in Racice in August.

You can catch the European Rowing U23 Championships livestream action on YouTube and find the results here.