World Cup 2 was used as a test for the 2019 World Championships and it produced some excellent racing and a few surprises.

The much-anticipated showdown between Mahe Drysdale and Robbie Manson never materialised as Mahe, struggling with a heavy cold all week, withdrew before the semi-final. But, even without Mahe, we were treated to another exceptional race. The German duo of Tim Ole Naske and Oliver Seidler (engaged in their own selection battle) leapt out to a lead with Manson back in 4th. At the halfway point Naske still led by 2 seconds, but Manson was reeling him in. It didn’t take huge fireworks just incredible consistency. The difference between Manson’s fastest and slowest 500m splits was 2.2 seconds, for Naske it was 7 seconds. That consistency saw Manson take the win by 1.24 seconds. The question now is, has he done enough to win selection for the New Zealand M1X spot? Mahe will be racing in Henley (aiming to win a record-equalling 6th Diamond sculls) and then another planned showdown versus Manson in Lucerne. But, given Manson has beaten Drysdale numerous times during the Kiwi domestic season, it’ll take something very special for Mahe to get the nod this year. Could this be the end of the road for the Olympic champion? Time will tell.

One of the races of the day (especially from a British perspective) was the M2X. Angus Groom and Jack Beaumont came into Belgrade as marginal favourites, but they had stiff competition from the Kiwi World champions Chris Harris and John Storey, plus the highly experienced Italians. In the end it was the Germans, Timo Piontek and Lars Hartig who jumped out to the lead, but the British tracked them, underrating them consistently and then moving clear at halfway to win by clear water. This was some of the best sculling I’ve seen from a British double for a very long time. They were exceptionally smooth and relaxed…Groom calling “Calm, Calm, Calm” to his partner throughout the middle thousand. This performance puts them in prime position for the rest of the season. Their main rivals, Lithuania, weren’t at Linz, but given how well the British sculled they will be confident of beating anyone in the world. 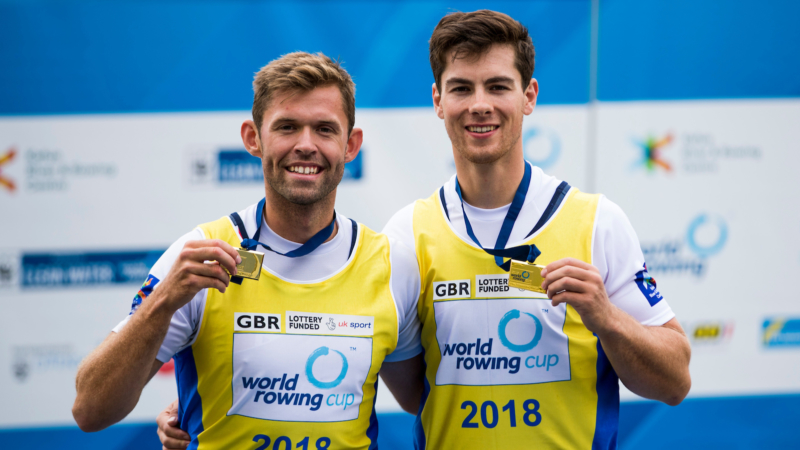 The M2- was also a really exciting, and somewhat surprising race. A lot of the hype leading up to the race was about the Croatians Martin and Valent Sinkovic. Their main rivals, Italy, withdrew due to illness and the exciting-looking Aussie pair decided against doubling-up and just raced the M8. One of the GB pairs got relegated due to an underweight boat (something that’s never happened to the senior GB team before). Everything was pointing to a routine win for the Croatians. But, clearly no-one had told the Czechs Lucas Helesic and Jakub Podrazil. They went bowball-to-bowball with the French for the 1st 1000m before stretching out. The Croatians were 3 seconds adrift at the 1500m mark and only a huge finishing sprint enabled them to overhaul the tiring French to claim silver. This was the Czech Republic’s first ever gold medal in the M2-.

If the M2- was a surprise the same can’t be said for the M4-. Australia were the overwhelming favourites and they duly delivered, leading from start to finish and able to watch the scrap for the minor medal behind them. The Romanians won that battle taking the silver over the Germans. Great Britain, who have dominated this event for years, had a solid performance placing two boats in the A final and finishing 4th and 5th. The interesting point her was that it was GBR2 who claimed the bragging rights over GBR1 (the GBR2 boat are slated to race at Henley facing the GB U23 crew in the Stewards Challenge Cup).

The surprise in the M4X was the fact that the favourites, Great Britain, failed to make the A-Final. This left Jurgen Grobler scratching his head and just putting it down to “a bad race”. There were more surprises in the final with the young Italian quad jumped out to a lead and never looked back taking the win by 2 seconds over the Dutch who just managed to overhaul the Germans in the last couple of strokes. 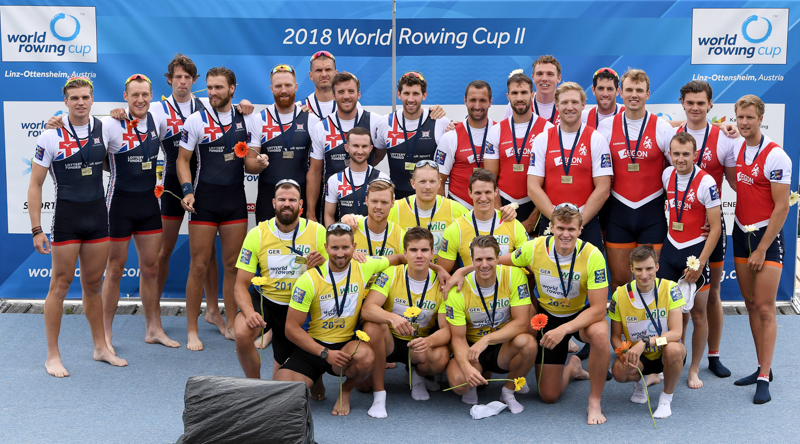 In the men’s lightweight double all eyes were on the new French combination of Pierre Houin and Thomas Baroukh. There’s a lot of pressure and expectation on this duo and in their first outing they showed potential but finished a second outside of the medals. Instead, it was the highly experienced Italians, Pietro Ruta and Stefano Oppo who led from start to finish ahead of the 2013 World Champions from Norway.

The women’s single scull got the home crowd excited with local favourite Magdalena Lobnig jumping out to a clear water lead, could she hold on and hand world Champ Jeanine Gmelin her first defeat in 2 years. Gmelin is one of the smaller scullers in the field, but she’s also one of the most powerful. She wasn’t flustered by the extent of Lobnig’s lead and overhauled her in the 3rd 1000 to pull away to yet another gold medal. Lobnig just held on to silver with Denmark’s Fie Udby Erichsen taking bronze, her first appearance on the podium since winning silver at the London Olympics.

The Women’s pair was always likely to be a comfortable win for Kerri Gowler and Grace Prendergast. The World Champions were the class crew of the field and so it proved in the final. They led by a second at the 1st marker and 4 seconds at 1,000m, they eventually ran out winners by just under 7 seconds ahead of Italy who in turn had 7 seconds over the British 2nd pair (who beat their no.1 crew by a length).

It was a similar story in the w2X, the New Zealand World Champions, Olivia Loe & Brooke Donoghue started slowly but just worked their way through the field taking the lead in the 3rd 500m and taking the gold by 2.45 seconds ahead of the Dutch. Carina Baer of Germany took bronze with partner Michaela Stahlberg, in her first race since winning gold in the W4x at the Rio Olympics. 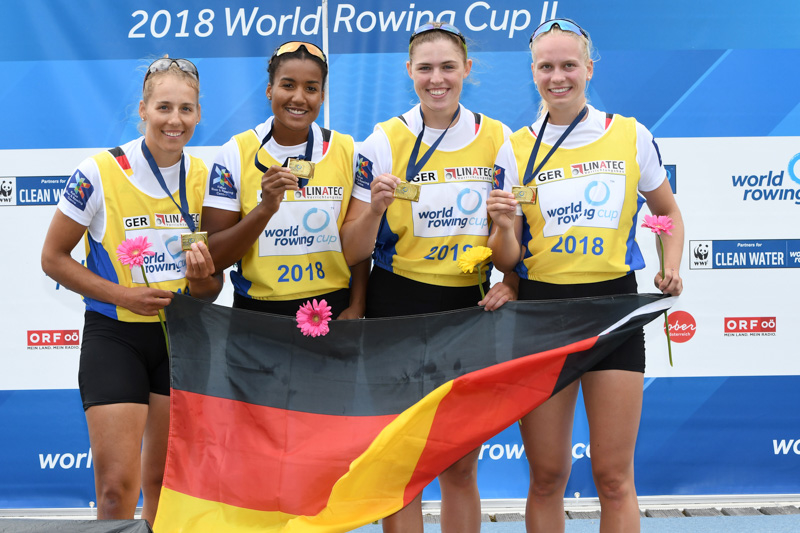 Germany also took gold in the W4X with Marie-Catherine Arnold, Carlotta Nwajide, Franziska Kampmann and Frieda Hämmerling overhauling Ukraine in the 3rd 500m who faded badly into 5th. China won their only medal of the regatta with a silver medal (the new high-performance director, Sir Steve Redgrave, making an immediate impact as he chose to place Xiaotong Xu in the stroke seat).

In the W4- the Brits and Aussies had a great battle all down the course with the Australians just being able to pull clear in the final 500m. The British threw everything at the Aussies and three-seat Karen Bennett required medical attention after the race and wasn’t well enough to attend the medal ceremony. Fortunately, she recovered completely and the team had their own mini medal ceremony at the airport. 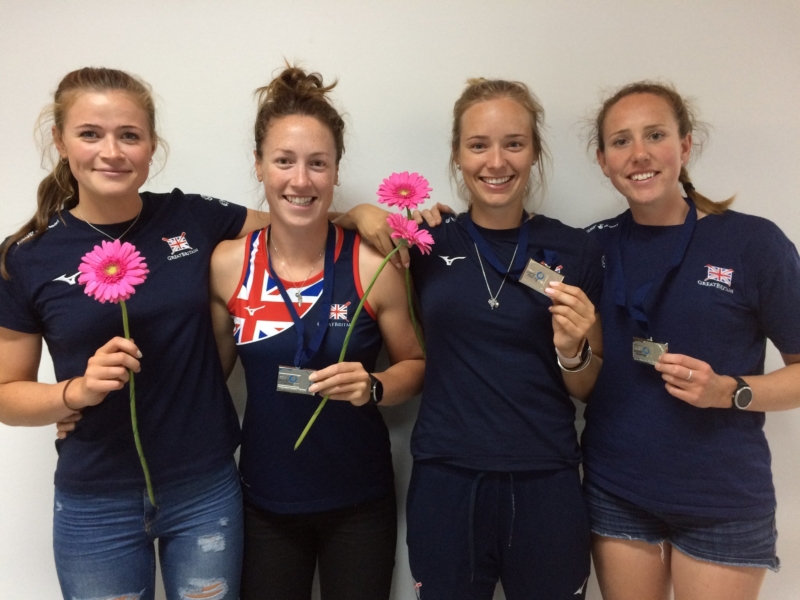 In the women’s 8 the Netherlands looked superb, they rowed really smoothly and efficiently (a real Dutch trait in the 8’s) leading by 2 seconds at the 100m mark and never looking back. Behind them, the New Zealanders (who’s style looks a lot more aggressive than the Dutch and reminds me of how the American women row) won the antipodean battle taking the silver ahead of the Aussies with the British back in 4th. One of the surprises in this race was that world champions Romania were never in the hunt, ending up 5th nearly 11 seconds behind the Dutch.

In the women’s lightweight double the expectation was that this would be a three-way battle between the World Champions from Romania, the silver medallists from New Zealand and the Olympic Champions from the Netherlands. But, it was the Italians, Federica Cesarini and Valentina Rodini who got the jump on the rest of the field and led from start to finish, with the Dutch winning the battle for silver ahead of the Romanians with the Kiwis back in 5th.

So overall a great World Cup with some standout performances and some surprises. The World Cup circus now moves on to Lucerne where we’re likely to see the American and Canadians join the party. We won’t see a big British team though, as they are prioritising Henley and the European Championships before heading to Plovdiv in Bulgaria for the World Championships.