Another Henley Royal Regatta is in the history books, and the 2018 Regatta will feature in those history books for a long time. Scorching hot temperatures resulted in the lessening of the dress code in the Stewards Enclosure…the announcement the “Gentlemen may remove their jackets or blazers” arrived at 11:00am on finals day, a full 30 minutes before racing started. The hot weather throughout the regatta has made 2018 the hottest Regatta on record. The lack of rain in the build-up to the regatta, coupled with a helpful tail wind presented competitors with some very fast conditions. No fewer than 12 full course records were equalled or beaten on a day of drama and fantastic racing. 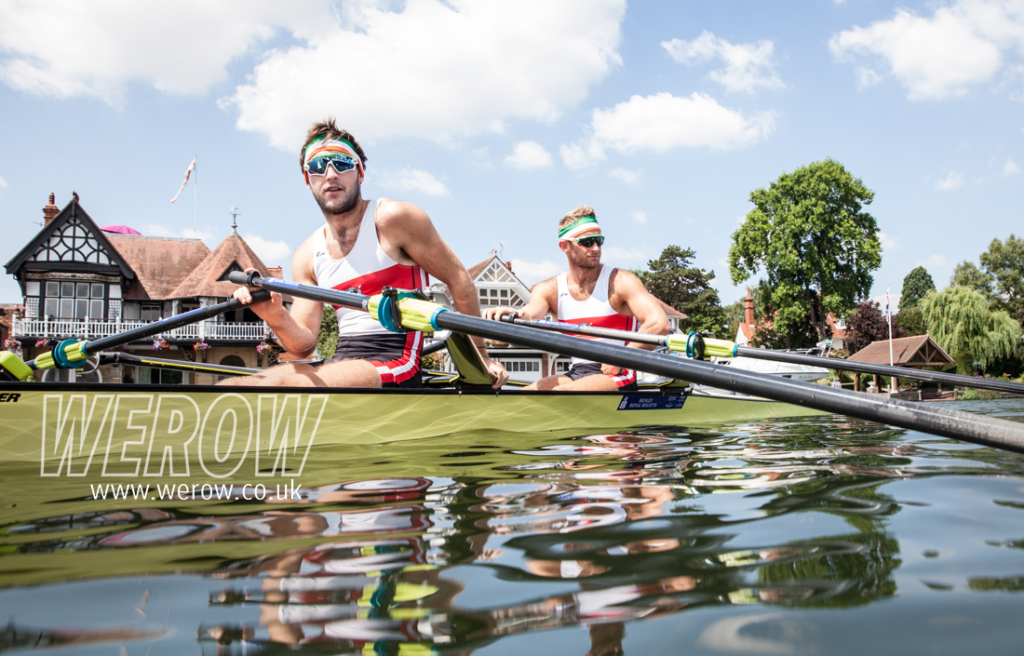 In the Diamond Challenge sculls, Mahe Drysdale was aiming to win his 6th title to equal the record set by Australian Stuart MacKenzie in 1962. His attempt looked to have come off the rails in the final as Norwegian Kjetil Borch took an early lead and gradually drew away from the Kiwi, having a clear-water lead approaching the Enclosures. But, Mahe was not done, he began a monster sprint and drew level approaching the Progress Board. Borch had nothing left to give and Mahe ended up winning by 3 lengths. It was an incredible race to watch and is, without question, the best Diamonds final I’ve seen in over 30 years of attending the Regatta. 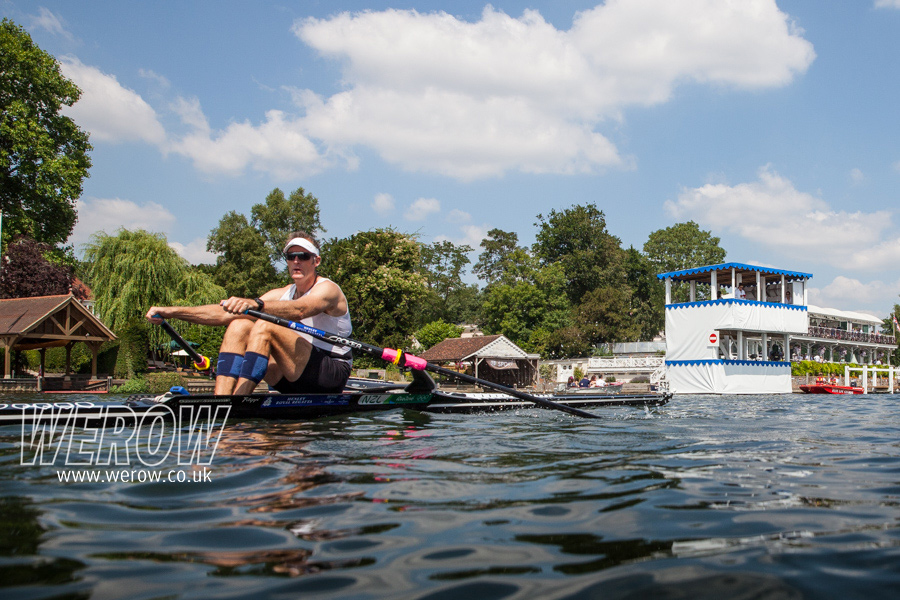 Jeanine Gmelin of Switzerland was racing at her first Henley Royal Regatta, but she, too, has left her mark in the record books. Her win in the Princess Royal Challenge Cup broke both the Fawley and Finish records set by the great Maria Brandin and Mirka Knapkova. 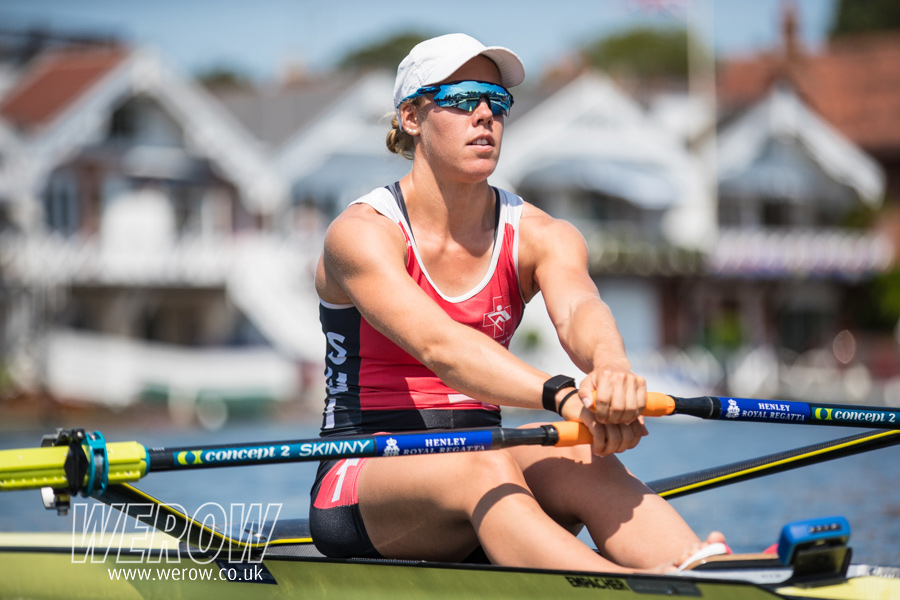 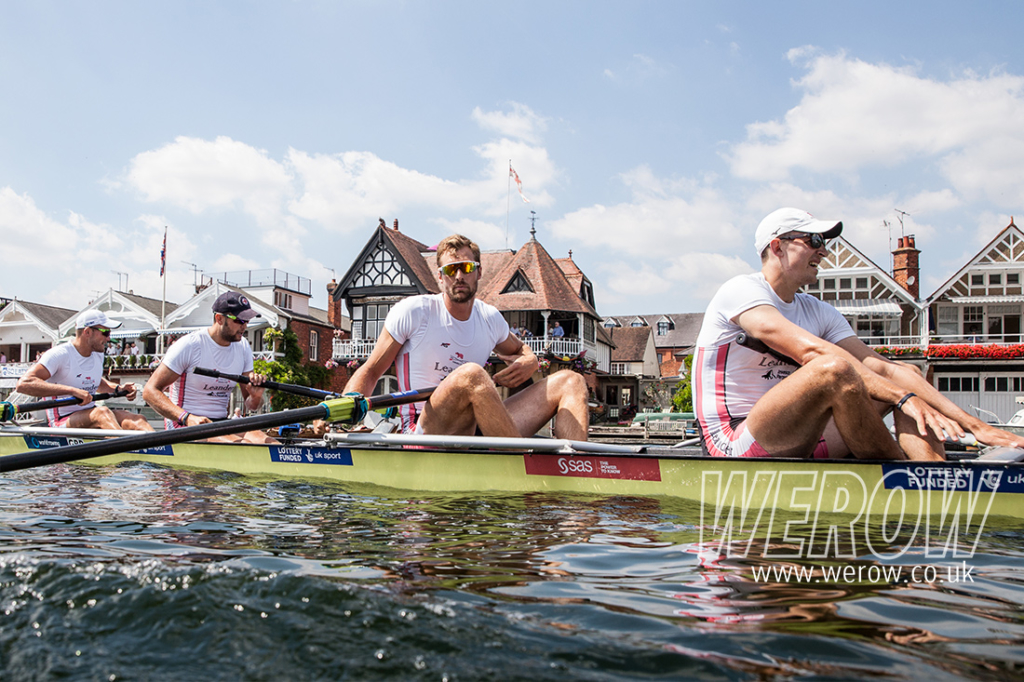 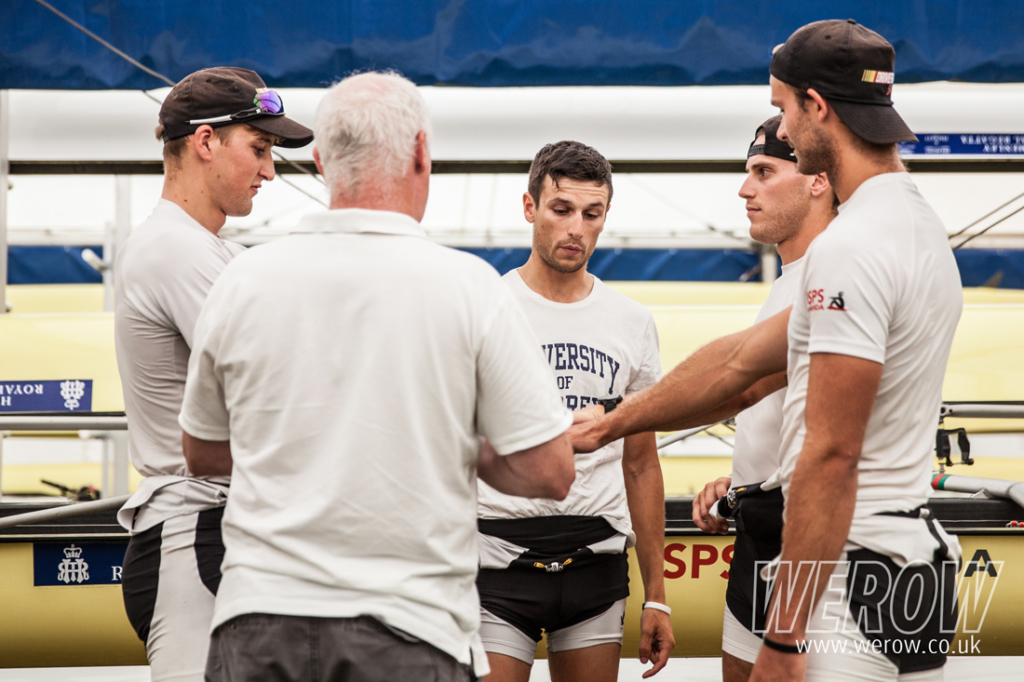 The final of the Grand Challenge Cup produced another outstanding race. The Romanians, racing as Dinamo Bucharest and Steaua Bucharest leapt out to an early lead over the Australians (The Georgina Hope Rinehart NTC) opening up a length’s lead rating 42 and setting a new record to Fawley of 2:52. But the Australians reeled them in and drew level coming into Stewards and rowed through the Romanians striking 45. In the end the Australians won and set a new record of 5:53

The Remenham Challenge Cup was another win for the Georgina Hope Rinehart National Training centre of Australia, as they dispatched the GB W8 by 2/3rd of a length. 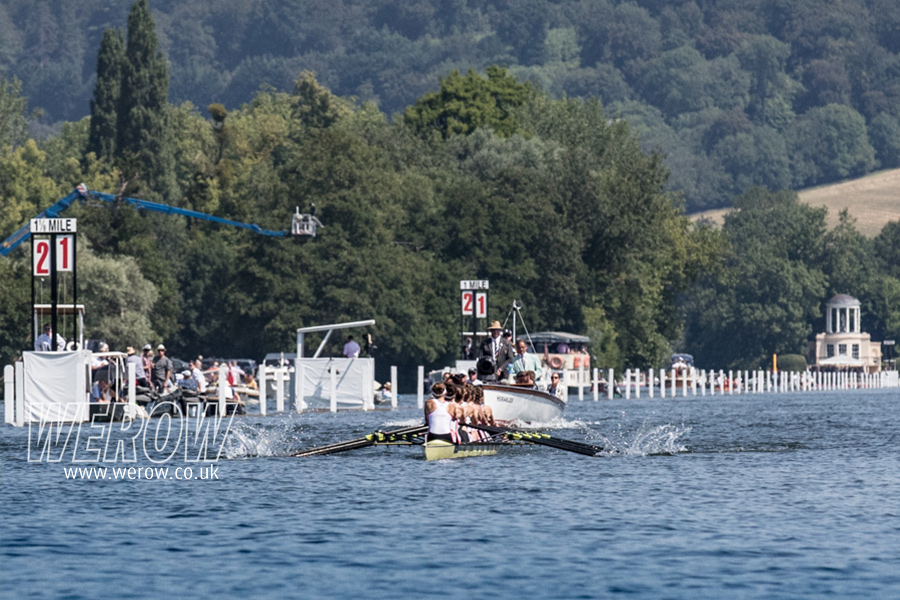 The Princess Grace for women’s quads was a comfortable win for the GB senior Women’s crew over the Norwegians from Christiania Roklub. The British lead by 1 length at the quarter-mile signal and were never troubled, coming away with a 3 length verdict.

It was a similar story in the Town Challenge Cup for W4-. The GB squad (racing as University of London and Leander Club) held off a spirited performance from Molesey to take the win by 1 ¾ lengths, setting new records to the Barrier and Fawley in the process. 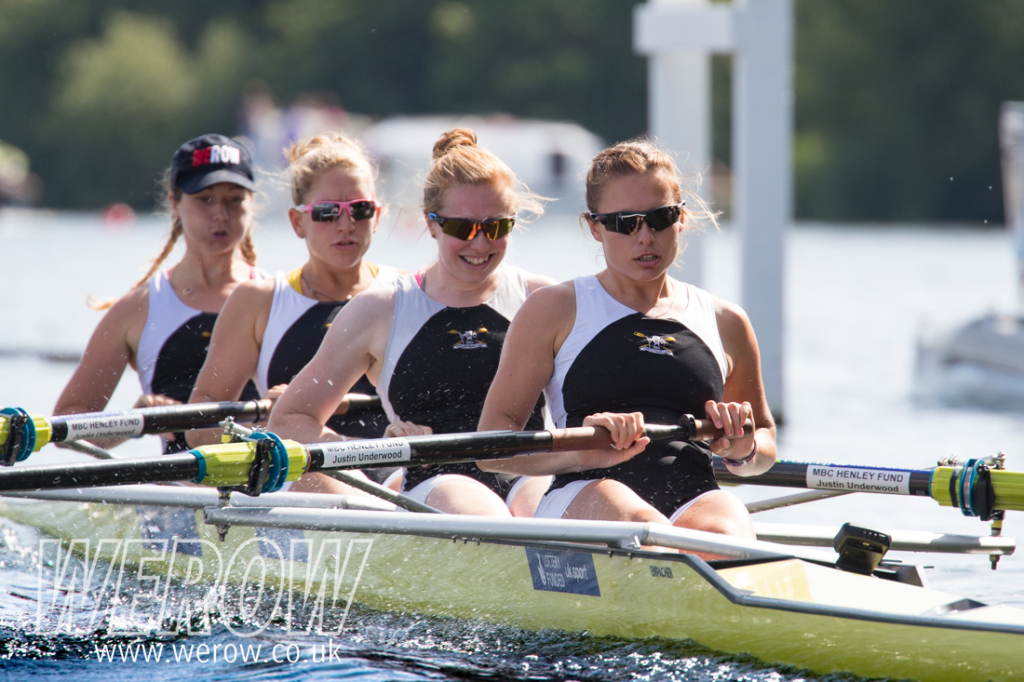 Another record-breaking race, and one for which there was a huge amount of anticipation was the final of the Princess Elizabeth Cup. The anticipation wasn’t really about who was going to win – St Paul’s were the overwhelming favourites against Eton. The anticipation was about how fast could Bobby Thatcher’s boys go. Throughout the Regatta St Paul’s had posted almost identical times to the Barrier and Fawley (including setting a new record to Fawley by 3 seconds) before backing off and paddling for the 2nd half of the race. For the final it was time for Bobbly to let his boys off the leash…and boy, did they deliver. 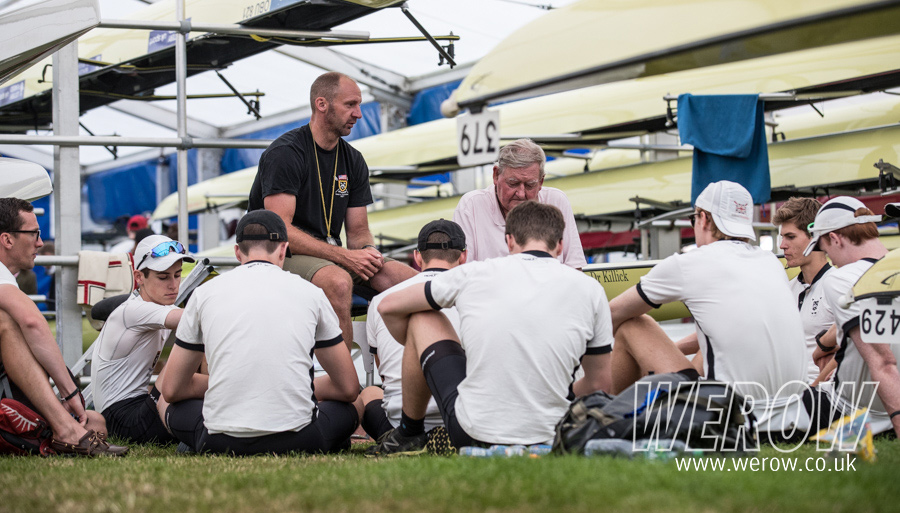 St Paul’s broke the Barrier record by 1 second, their own Fawley record by 2 seconds (becoming the first Schoolboy 8 to go under 3 minutes to Fawley) and the finish record by a ridiculous 11 seconds posting a time of 6:06. All credit to Eton, they knew they were facing a “one in a lifetime” crew in St Paul’s and were a very strong school crew that in other years would’ve won the PE. But they were up against something really special. I’ve a feeling the St Paul’s record will stand for a very, very long time. 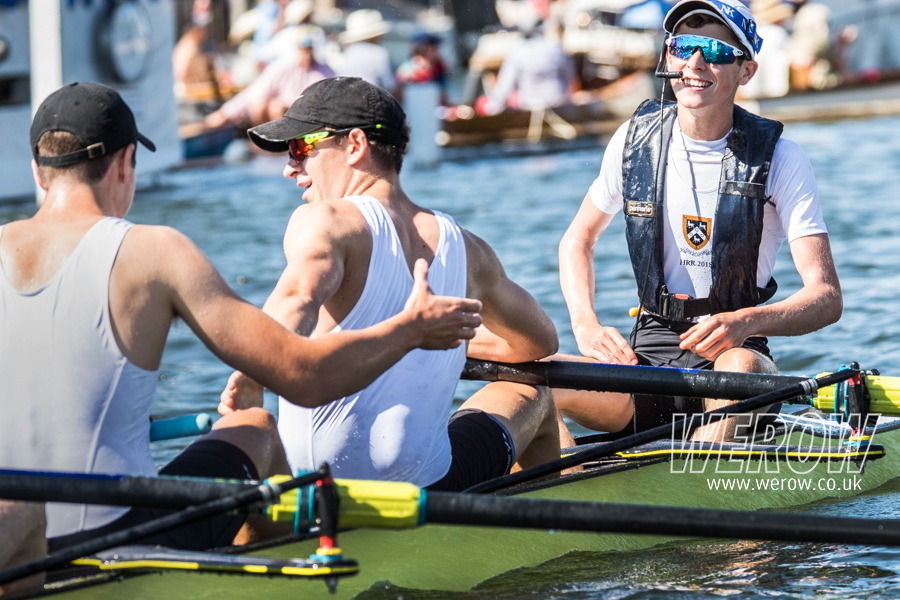 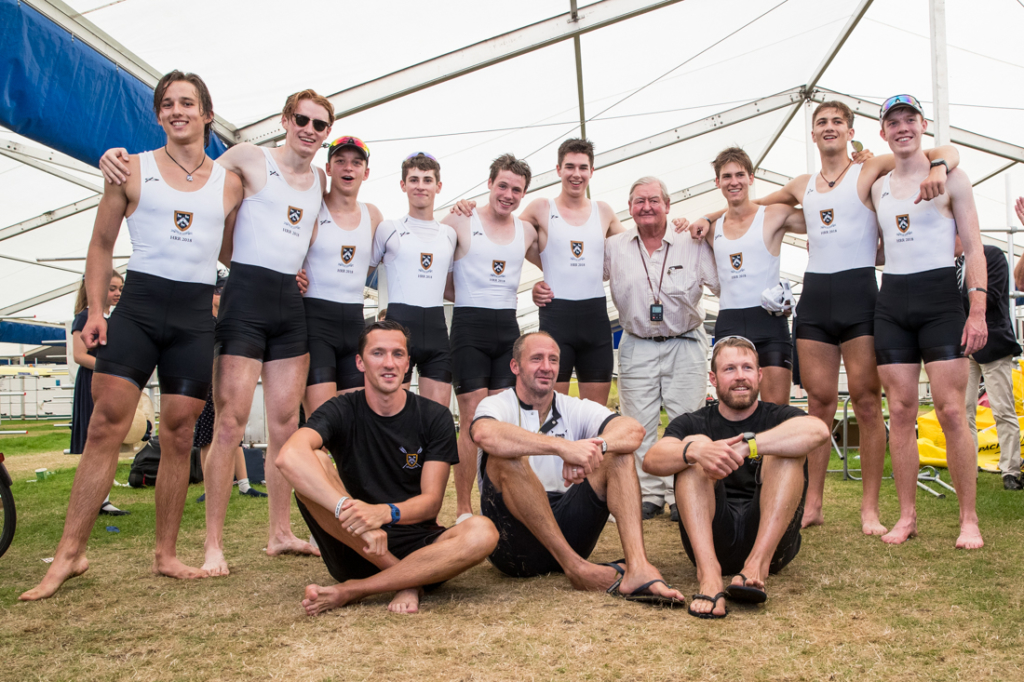 Another eagerly-awaited match-up was the final of the Temple – the University of Washington v Oxford Brookes. The change to the eligibility rules in the Temple meant that the US Varsity rowers were now able to race in this event. The Huskies had brought a mixed crew made up of athletes from the 1st 2nd and 3rd Varsity boats. For Oxford Brookes the Temple crew was essentially their 3rd 8 (the top 2 crews would contest the Ladies Plate final). Earlier in the year Brookes went to Seattle to race the Windermere Cup against Washington and were on the wrong end of a 1/3rd of a length verdict. Today was a chance for revenge (even if they were two completely different line-ups). But, the Huskies were just too strong and produced an outstanding row to set new marks at the Barrier, Fawley and the Finish (their times to the Barrier and Fawley equalled the previous records for the Grand). Their full course time of 5:58 was another outstanding performance and a time that will probably last for a long time. 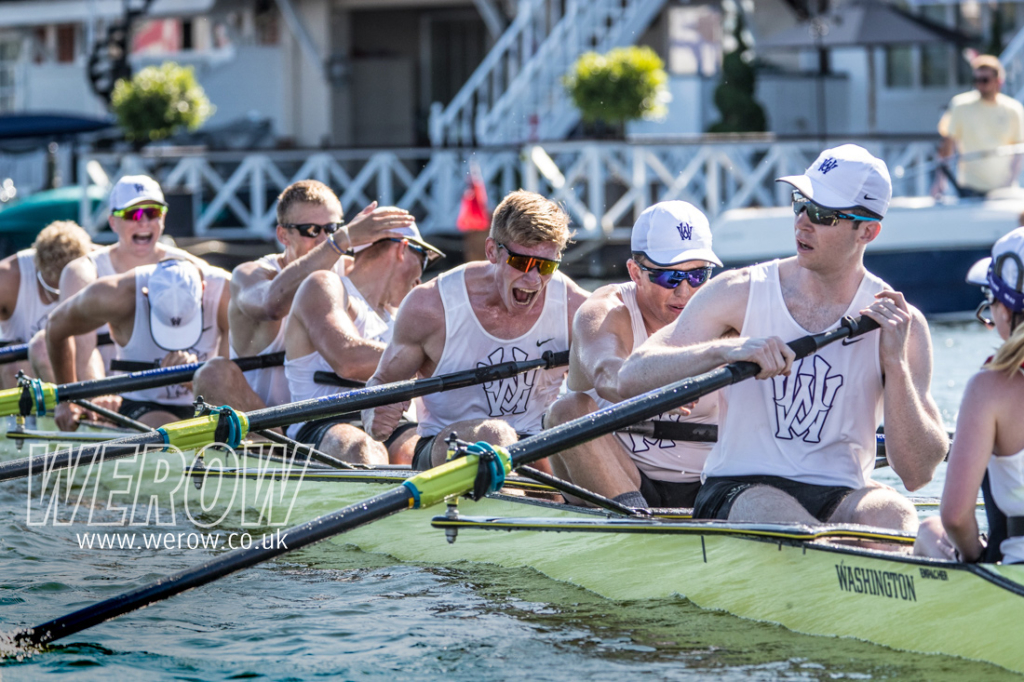 The Ladies Plate turned into a celebration of the strength in depth of the Oxford Brookes programme with two Brookes crews reaching the final (albeit the 2nd crew was a composite with one athlete from Edinburgh University). Brookes 1st 8 are the fastest British eight outside of the national squad when they recorded a time of 5:29.06 at Ratzeburg regatta this season and that class showed as they equalled the record to the Barrier, set a new record to Fawley and then equalled the full course record of 5:58. 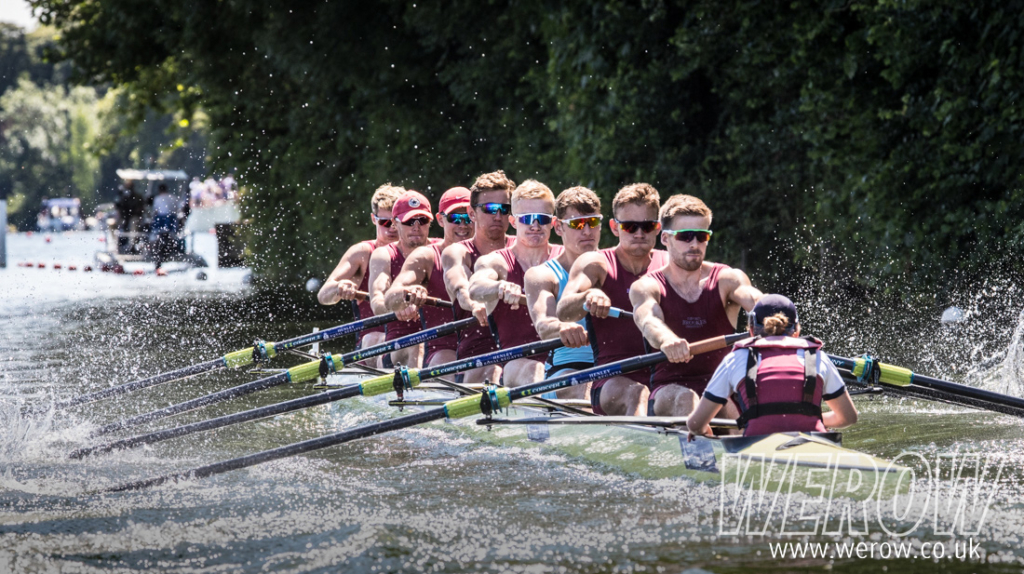 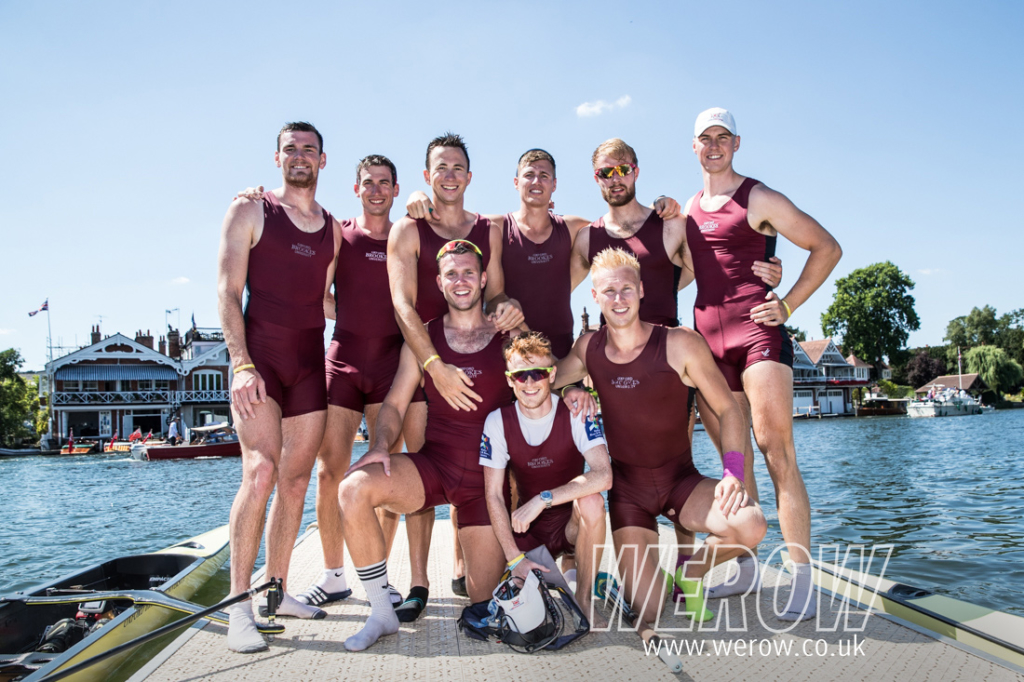 Two of the oldest records in the books are the Barrier and Fawley marks for the Queen Mother Challenge Cup, which have stood since 1989. But, the GB M4X (racing as Leander Club and Agecroft) had their eyes on them. Racing against Fana Roklubb of Norway (which included a late substitution of Seb Devereux from Leander), They set new times to both marks and just missed setting a full course record by 1 second. 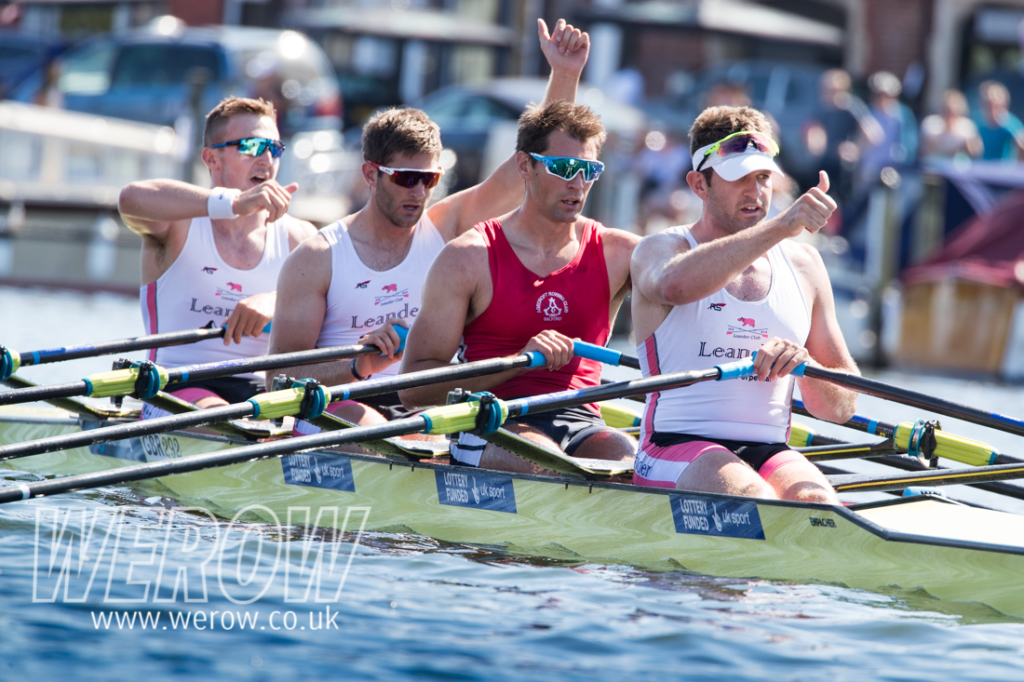 The surprise in the Prince of Wales was that Leander Club missed the final for the first time since 2005 having been beaten by a very talented Dutch crew from Skoll who went on to beat the GB U23 quad in the final and complete a Holland Beker/Henley double.

Records also fell in the Double Sculls Challenge Cup. The O’Donovan brothers from Skibbereen had their eyes on an upset of the heavyweight GB pairing of Jack Beaumont and Angus Groom, and the Irish put the Leander boys under pressure throughout the first half of the course. But Groom and Beaumont are the best M2X in the world at the moment and responded well to the pressure, eventually breaking the Irish and sculling away to win comfortably in a new record time. 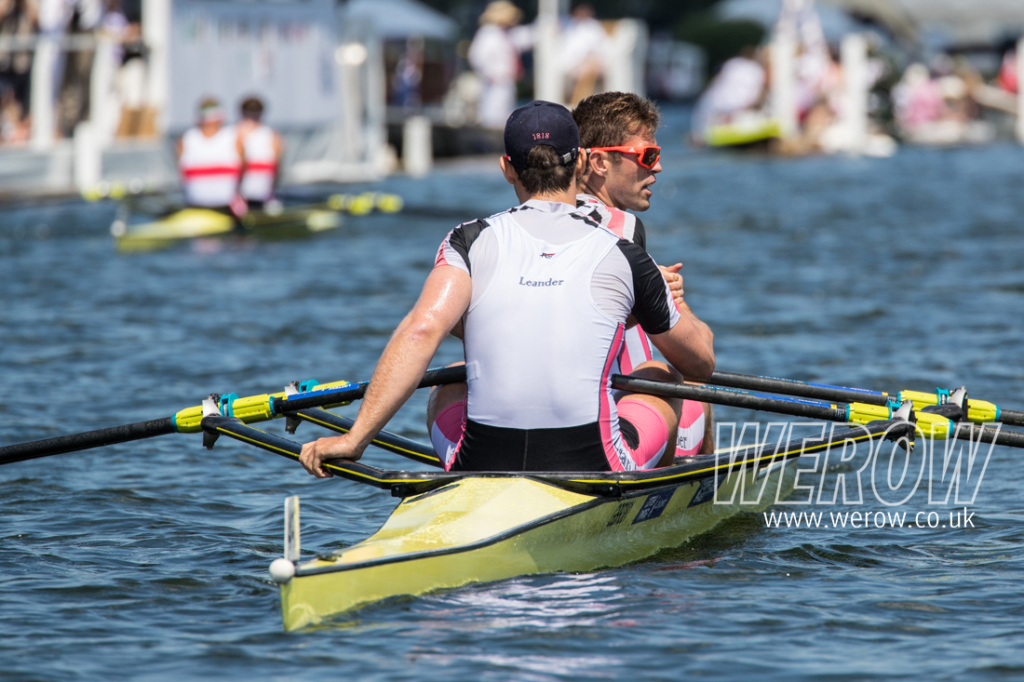 It was a similar story in the Silver Goblets and Nickalls Challenge Cup. The Sinkovic brothers from Croatia faced Watts and Widdicombe of Australia. The Aussies jumped out to an early lead. But the Croatians held their nerve, reeled in the Aussies and then disappeared into the distance, ending up with an “Easy” verdict. They will be particularly pleased to have set a new course record as it knocks the pairings of Redgrave & Pinsent and Murray & Bond out of the record books entirely. 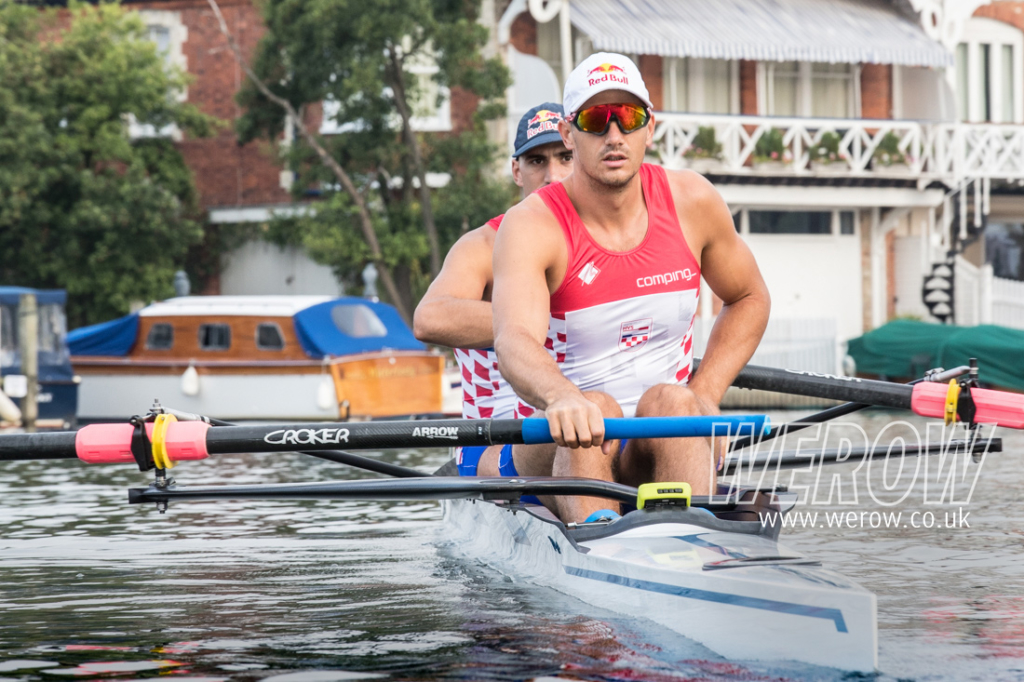 The Sinkovic brothers from Croatia at Henley Royal Regatta 2018

The biggest surprise of the day came in the Hambleden Pairs. The selected GB pairing of McKellar and Taylor went down to the young U23 GB pairing of Hannah Scott and Heidi Long.

Y Quad Cities Rowing Association of the USA became the first overseas crew to win the Diamond Jubilee Challenge Cup, when they overhauled Marlow Rowing Club in the final – setting a new record in the process. 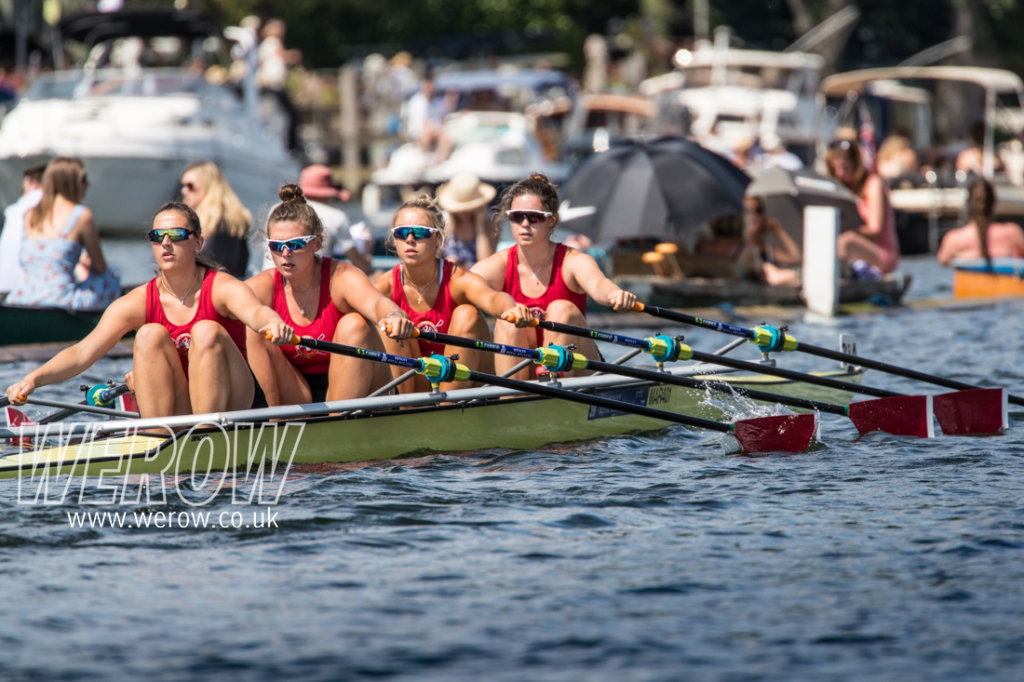 The GB U23’s also won the Stonor Cup for W2X with Charlotte Hodgkins-Byrne and Anna Thornton of The University of London and Nottingham beating the lightweight pairing of Danielle Semple and Susannah Duncan from Exeter University by 4 ½ lengths. 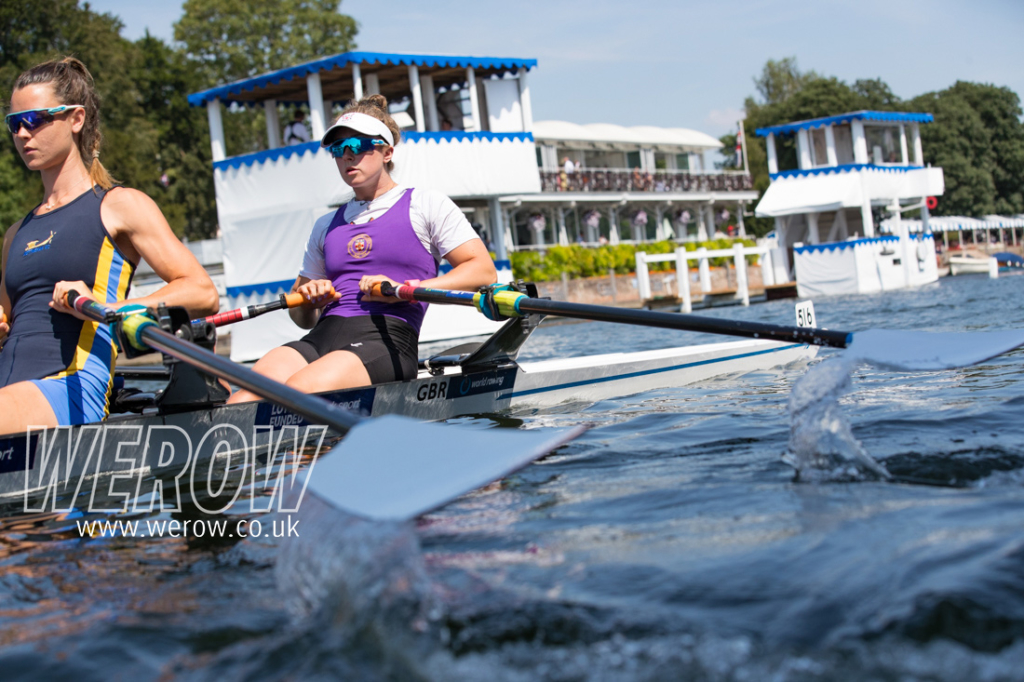 Leander club retained the Visitors’ Challenge Cup defeating the University of London (finally setting a Visitors’ record that was lower than the Wyfold).

Thames retained the Thames Cup with a powerful row against NSR Oslo (losing their 2nd final in 3 years) and the Putney based club had their most successful regatta for years when they won a 2nd title taking the win in the Britannia ahead of a young Molesey crew.

Finals day opened with a great battle between Imperial College and Goldie in the Prince Albert. Imperial jumped out to an early lead and fought off repeated charges from Goldie to come away with ¾ length win. 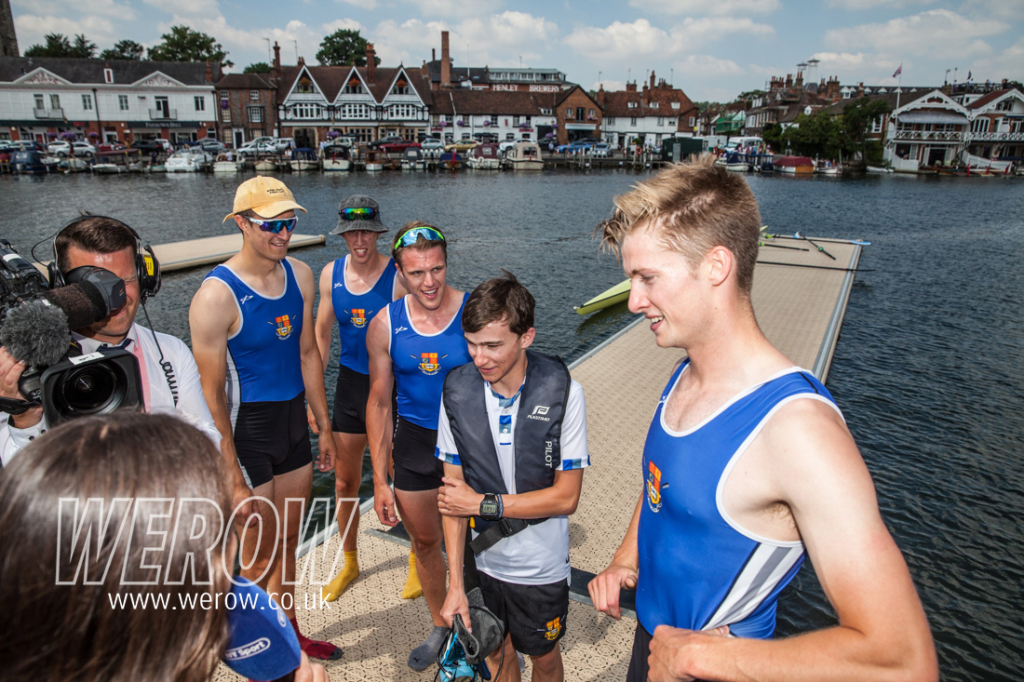 Finals day closed with a superb display of junior boys sculling in the Fawley Challenge Cup, when local rivals The Windsor Boys School raced Maidenhead Rowing Club. These two crews have been going head to head all season with Maidenhead winning the National Schools and Windsor performing exceptionally well in Champ quads at Marlow. At Fawley the defending champions from Windsor put on a master class of quad sculling retaining their title with a commanding 3 length victory and setting new records to Fawley and the finish in the process. 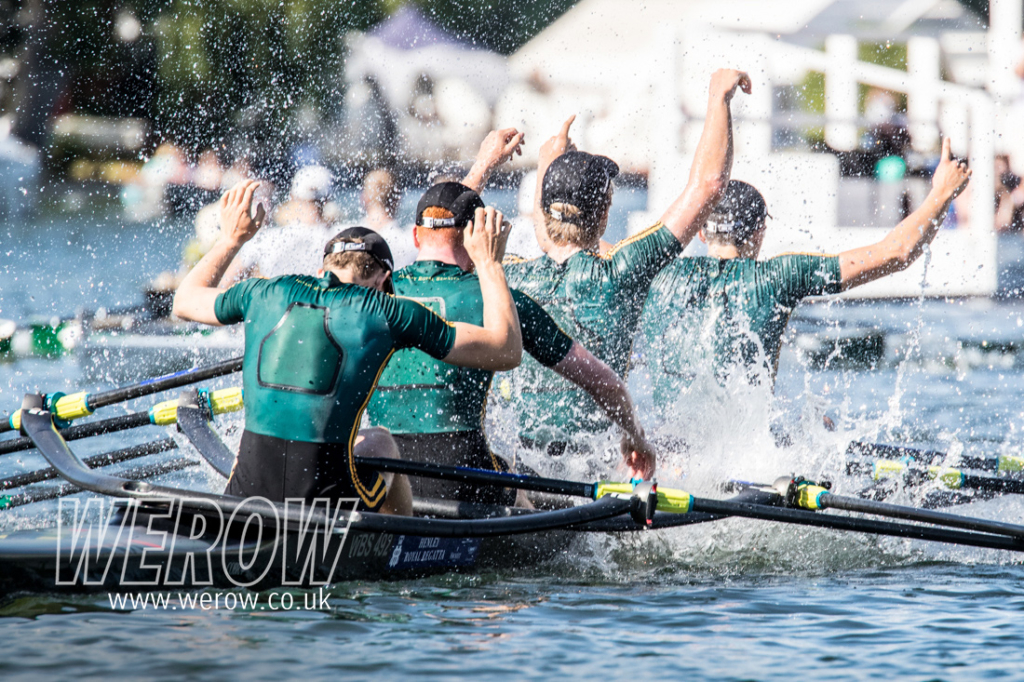 It’s been a fantastic week’s racing, one of the best regatta’s for many, many years. I can’t weait for 2019.

Is it Henley yet?