Amid the social media storm of National Schools Regatta, it was easy to overlook the European Rowing Junior Championships being held in Gravelines, France on Saturday. A record 34 countries competed with GB sending only four crews owing to the date clash.

The standout story from the event was the win by Jake Offiler of Globe and James Cartwright of Gloucester RC. Having won both heats with relative ease, Cartwright and Offiler had to fight all the way to win the gold by 0.28 seconds from the Italians who in turn were only 0.23 seconds ahead of third-placed Belarus.

Offiler, who is 18 and a student at Wanstead High School in NE London, told WEROW: “We were leading by about a length until 250m left and all of a sudden the Italian and the Belarussians just put in a phenomenal sprint. There was a foot between all of us and we were lucky to be the right side of it.”

Having missed the early part of the season owing to a hip injury, Cartwright told WEROW that the pair went into the competition looking for the experience of top-level competition and not looking to win it. “After winning both heats we started to think we might have a chance. We had a great start and up to the 250m mark we had a canvass and a half from the pack and it stayed there till 500m, we had a push at 1,000m and that gave us a length.”

“At 1,500 m we went through our normal tiers, winding it down for the finish and I saw the Italians starting to hammer the rate and I thought, right we need to get shifting now so we whipped it up. In the last 100m, I was looking around a lot to see where the other crews were and Jake just shouted at me “eyes in the boat!” It was so close that when we crossed the line we didn’t know if we’d won or not.” 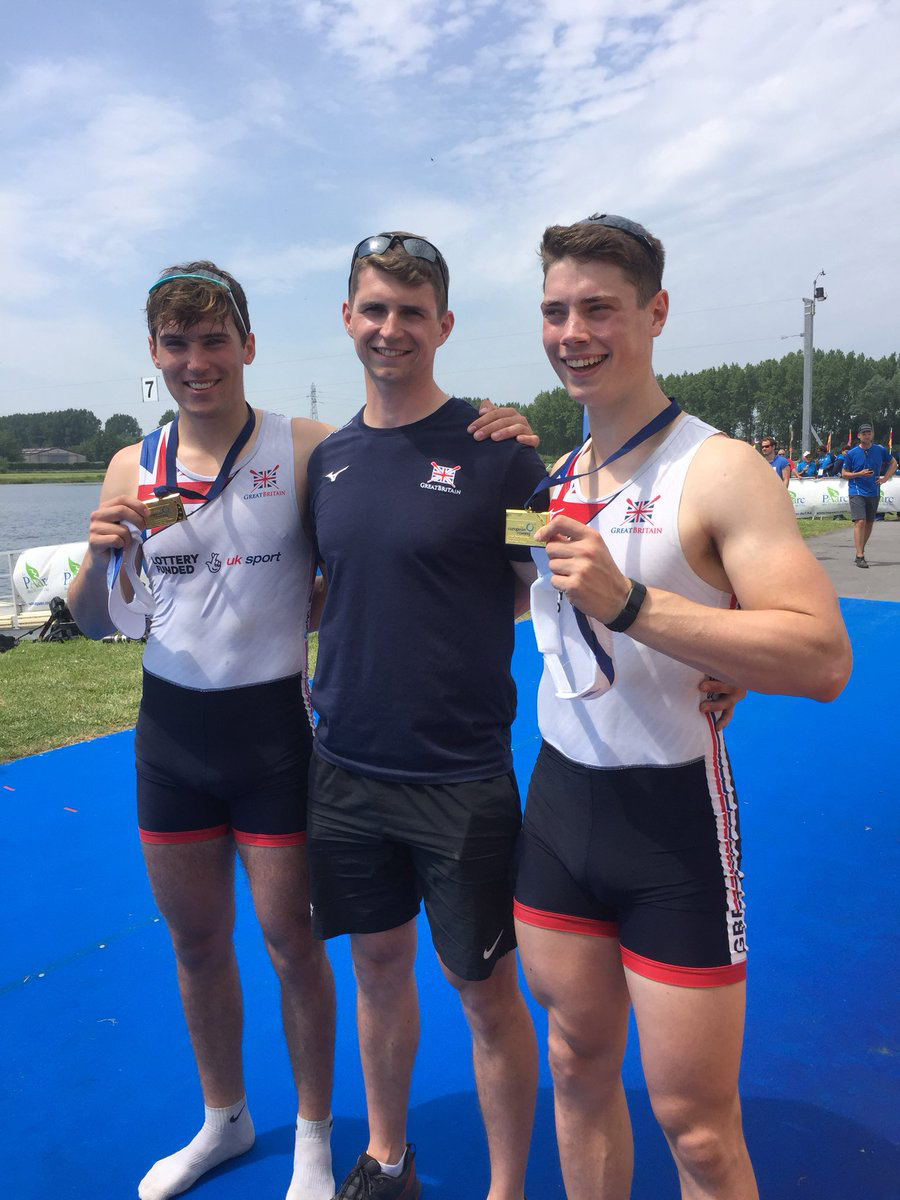 Cartwright, 17 and studying for A Levels at Gloucester Hartpury, came into rowing through the GB Start program. “It was a regular day at school and the start guys came in and said “you’re tall, do you want to try rowing?” and I said yes and it went from there really. I joined Gloucester Rowing Club for six months and then my rowing really took off when I joined Hartpury College where I’m now in my second year.”

This win by the pair, who are being coached by Ben Jackson, GB Start coach and head coach at Gloucester Hartpury, doesn’t guarantee either sculler a spot at the World Rowing Junior Championships. They have still to do final trials and selection before the team is picked for the championships being held in Racice in August. “There are a lot of guys who are pretty good and want the seats so it’s going to be tough,” said Offiler who came second with Laurence Joss behind Victor Kleshnev and Bryn Ellery, in the February trials and sixth overall in his single at April trials.

Izzy Lack of Tideway Scullers and Rhiannon Morgan of Gloucester RC in the JW2x were third in their heat and made fifth in their B Final. Phoebe Campbell of Thames Tradesmen came fourth in her B Final in 8:11.42 with the A Final being won by reigning world junior champion, Esther Briz Zamorano of Spain in 7:41.64.

Laurence Joss of Tideway Scullers won his B Final by three seconds in a time of 7:11.09 with the A Final being won by Moritz Wolff of Germany in 7:21.74. Wolff won silver at the World Rowing Junior Championships in Trakai last year.