McGowan moved to the Netherlands in his 20’s where he oversaw the Dutch LM8+ which won the World Championship gold in 2007. He coached the M8+ for both the Beijing Olympics in 2008 and the London 2012 Olympics. The Dutch boat was initially coached by Rowing Ireland high-performance director, Antonio Maurogiovanni before he was let go by Dutch Rowing two months before the London Olympics. 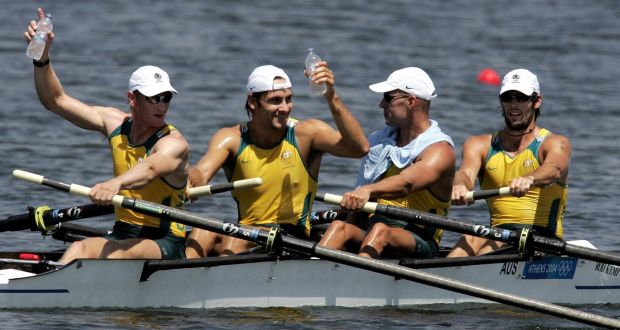 David McGowan in the bow of the Australian M4- (Image: Maxim Marmur/AFP/Getty Images)

McGowan will be well known to Maurogiovanni who coached the Australian four for the Athens Olympics.  McGowan succeeded Maurogiovanni as head coach at Swan River Rowing Club in Perth, Western Australia from where both have left in turn to join Rowing Ireland.

McGowan said “I feel privileged to have been offered this opportunity at such an exciting time for Irish rowing. I look forward to both working with Rowing Ireland and rowing in Ireland and I am excited to be joining the team shortly,”

It’s believed that McGowan will take up his post later this month. His task will be to help build a pathway for athletes from junior, university and senior level to international competition. On the ground, he may well have to do some bridge-building to reunite athletes and coaching team after the team’s recent troubles.