The GB senior rowers are currently in a cycle of weekly testing and camps. No doubt they will all be looking forward to the Christmas break before heading off to camp again in the first week of January. It was great to see so many of the female athletes compete individually at the British Rowing Indoor Championships (BRIC) last weekend, especially as the women only entered the relay events last year.

Alice Baatz, aged 25, won the women’s event in a time of 06:44.0 with team-mates Harriet Taylor, Rebecca Shorten and Karen Bennett taking silver and bronze. The winning time may be some way off Ukranian rower Olena Buryak’s record of 06:22.08 set earlier this year, but the GB senior women took the top 14 places with 16 seconds separating them, all significantly ahead of the rest of the field.

Alice Baatz told WEROW that the long sessions earlier in the season had paid off on the day. “In the week leading up to BRIC, I did some pieces on the ergo every day. These got shorter and sharper as we got closer to the event. Before that it was maybe a couple of sessions a week of long, endurance stuff. It might seem a bit odd to do so many miles in order to race a 2k, but you’ll only realise how important that engine is when you’re in the middle of your test and able to push on in the second half… or not! “ 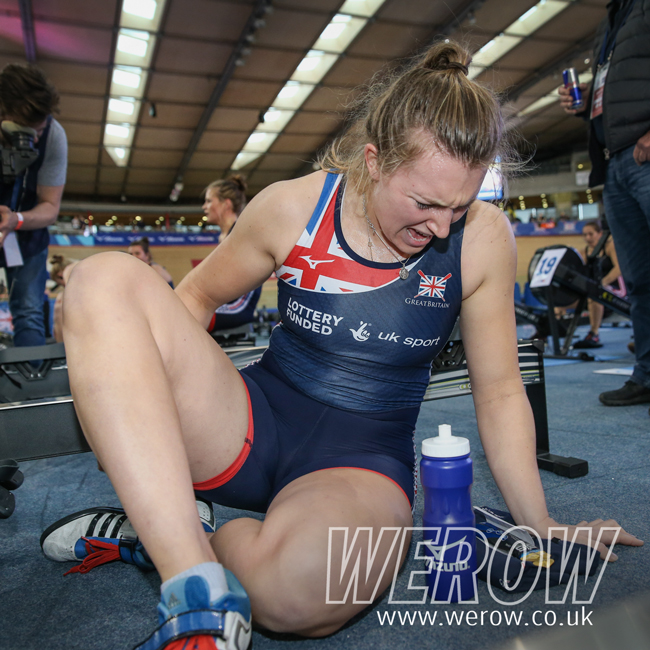 Baatz, who has a degree in psychology from Bangor University, says she knew beforehand that she wasn’t on for a PB. She was happy that she came into the competition with that knowledge and was relieved to get the win. “I was just racing to try and get the best score I was capable of getting on the day. I said beforehand I’d be between 6:41 and 6:45, so 6:44 was meeting my own gold medal standard for that week.”

“A couple of the others had been pulling some really good stuff in the week leading up to BRIC and I was sure I wasn’t going to end up at the top to be quite honest. Even with about 250m to go I still wasn’t sure I’d make it in time.”

Josh Bugajski, who came third in the men’s competition, told WEROW before BRIC how he’s now comfortable on the erg. Baatz says she’s also made peace with the machine but admits to swinging between love and hate. “I’ve come to realise it’s not only a machine I want to rip apart come testing but it’s a hugely useful training tool; not only to build on your own endurance and fitness but also to give you feedback and show you when something might not be quite right.” 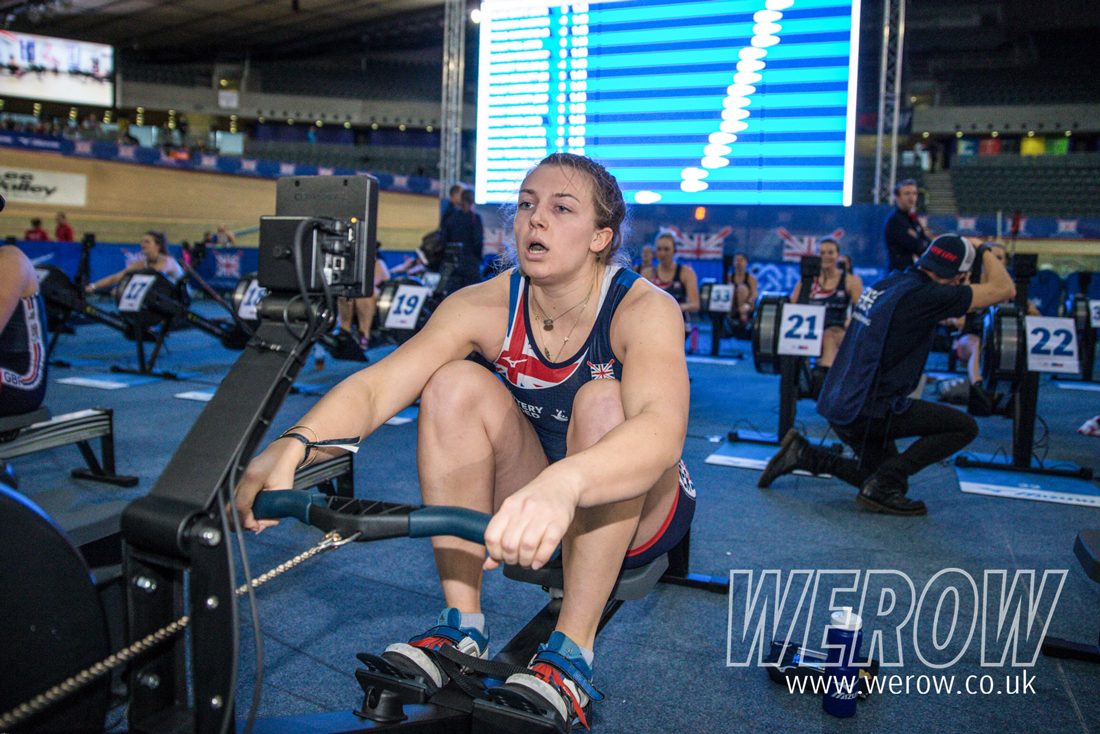 Alice Baatz on the erg at BRIC18

“If you’re pulling at what feel like a normal intensity and the numbers aren’t what you’re used to, it may indicate you need a little more recovery and rest. This is just as useful and important as good training itself. Having said that, if you are going well it will make you feel so strong and that’s motivating in itself.”

For many women, indoor rowing is an activity where they can exercise with freedom, without fear of being bothered or being given advice by “well-meaning” gym rats. Because there are so many metrics available, it’s relatively easy to make progress and to exercise alone at home. Baatz says, “My mum started using the ergo for a little while and she loved it – her first comment was how powerful it made her feel.”

Away from the water, Baatz, who was educated at The Godolphin School, Salisbury, does some psychology tutoring with A-Level students to support herself. “I try to make sure my attitude to my own training comes across there too – do what you need to do, not what you don’t. Know the content for your exam, don’t go crazy and learn a whole bunch of extra stuff for the sake of it. Have a great time being 18 and at college with your friends.” 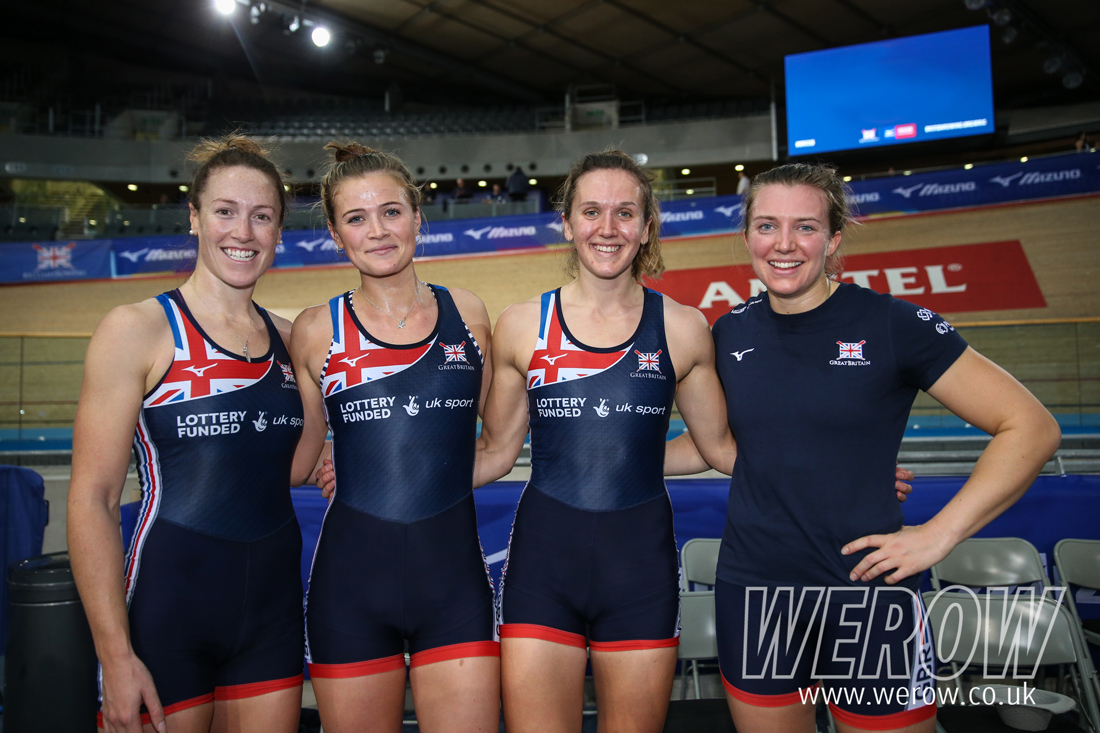 Heading into the Christmas break before January training camp in Aviz, we asked Baatz what motivates her to train every day at this intensity. “I really enjoy training, and feeling like the strongest and most powerful version of me. It’s also great to take that confidence into racing; if you know you’ve been training well and stepping up consistently then you feel great on the start line and believe in what you’re capable of.”

Baatz is eager to succeed and build on her fourth place in the W4x at the European Rowing Championships in Glasgow. Her aunt, Fiona Freckleton broke new ground for women’s rowing in 1991 winning bronze at the World Rowing Championships in Vienna, and she is keen to follow in her footsteps. There will no doubt be a lot more time to be spent on the erg for Baatz before the first World Rowing Cup 1 in Plovdiv on May 10, 2019.